C., the trans woman in eastern Cameroon who is being helped by this blog’s Not Alone Project, has been released from prison early and is preparing for training as a hairdresser, a career that she hopes will replace the income she previously earned as a sex worker.

C. had been sentenced to a year in Bertoua Central Prison for dressing as a woman. Her sentence was due to end last month but she had no money to pay the fine of 106,000 Central African francs (about $176) that the judge imposed during sentencing last year.

She was scheduled to remain in the Bertoua prison until November in order to pay that debt. Instead, generous donors paid her fine, so she completed her sentence on time in July.

A local hairdresser in Bertoua has agreed to train C. in a new career. The costs of that hairdressing training are being paid from readers’ donations.

The Not Alone Project of the Erasing 76 Crimes blog works with donors and Cameroonian LGBTQ rights advocates to help imprisoned LGBTQ people in Cameroon — people who are in prison for no reason except being found guilty of violating the nation’s anti-homosexuality law.

In other related activity supported by the Not Alone Project, members of the local LGBTQ advocacy group 2HRC on Aug. 6 visited M. and E., the two remaining lesbian prisoners in Bertoua Central Prison. They are still awaiting the end of their two-year sentences, scheduled for September. Because Cameroonian prisons are dirty, crowded, and provide inmates with meager amounts of food, the visitors from 2HRC deliver to the prisoners a variety of food and hygiene items paid for by the Not Alone Project’s donors.

On an earlier visit, the 2HRC visitors learned that M. needed eyeglasses. A doctor had prescribed them for her but she had no money to pay for them. Earlier this summer, a donor to the Not Alone Project contributed the $146 cost of the eyeglasses, which M. modeled for her visitors on Aug. 6.

In addition, on that day M. and E. were each given 10,000 Central African francs (about $18) for the purchase of perishable food, which is on sale at the prison, and for sanitary napkins, which the prison does not routinely provide.

More articles about the Not Alone Project:

The work in Bertoua is the third phase of the Not Alone Project. Information about the previous two phases of the project is below. 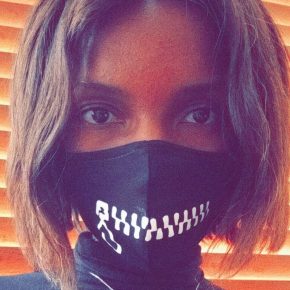