A gay Muslim who was arrested in 2015 when police raided his Cameroon hotel room, Ibrahim was sentenced to prison because his hotel rendezvous was with a man whom he loved.

Abandoned by his Muslim family, Ibrahim is a prisoner because of his sexual orientation

Since 2015, Ibrahim has been serving a six-year sentence for homosexuality at Guider prison in the Muslim-majority region of northern Cameroon.

A gay Muslim, 25-year-old frizzy-haired Ibrahim seems timid, with an absent look in his blood-shot eyes,. He says he has become just a shadow of what he was before his imprisonment three years ago. He is skinny from malnutrition and his skin is marked with scabs and skin disease.

In the past, he lived with his family and sold peanuts in the city to get by.

He knew he was attracted to men, but he did not admit it because he is a gay Muslim.

“I have always been attracted to people of the same sex as me,” he said. “I know that my religion condemns me but that attraction is stronger than me. I am almost its slave.”

A few years ago he made friends with Abdelaziz, 28, who also ran a small business in Guider.

They fell in love and soon were meeting for a regular rendezvous at a local hotel.  They would stay in the room for two to three hours of time, which caught the eye of the hotel’s receptionist.

Ibrahim picks up the story from there:

I do not know how they knew we were homosexuals, because we never arrived at the hotel together. One of us reserved the room in advance. The other entered discreetly.

That afternoon, when we were already in the room and ready for sex, we heard police banging on the door of our hotel room. Panicked, we refused to open the door.

The police quickly forced it open and found us.

We soon realized that the receptionist had wondered about our regular visits to his hotel and had alerted the police.

Police locked us in a cell for four days. During that time, none of our families came to see us, despite phone calls and letters. Then we were transferred to the prosecutor’s office. We were tried and sentenced to six years in Guider prison.

If we had more money, perhaps we could have bribed our way out jail and avoided the trial.

For three years now, our life in prison has been dismal. We are victims of homophobia — we are stigmatized, discriminated against and abused by guards and prisoners alike.

We don’t have enough to eat. The prison only supplies us with one meal a day — at most — and it is of poor quality.  Sometimes there’s no food at all. Sometimes we go several days without eating.

The food is so bad that we regularly suffer from diarrhea and other diseases.

Our families don’t help us at all. They wish we were dead.

From our families’ viewpoint, we have disgraced our religion, which prohibits this kind of practice.

If homosexuality were a choice, I would become a heterosexual so I could get out of this hell. But for me it’s a natural attraction. I can’t change it.

Please contribute to the Pas Seul / Not Alone project, which will provide food for Ibrahim and two other men who are in northern Cameroon jails solely because of whom they love.

Our request to you is to help us raise money for the prisoners’ food over the next six months. To do that, please sign up for a modest monthly donation — $5 would be helpful, $10 or more would be better. This can be easily arranged through the DonorBox site, where donors keep control and can cancel at any point. Of course, we will accept one-time donations (via Facebook, PayPal or check) if you prefer to contribute in that way. 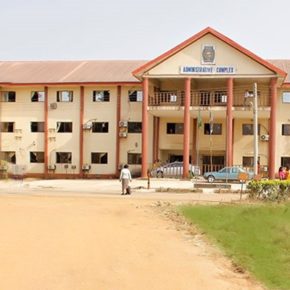