With your help, early release is possible for two lesbians who have been imprisoned in east Cameroon since August 2018 after being convicted of violating Cameroon’s anti-homosexuality law.

Eva, a hairstylist, is a slender 28-year-old with large black eyes, a round face, long hair and a nose ring.

Marie, 24, has a thin face, small eyes, dimples on her cheeks and short, yellow-tinted hair.

They have been in a loving, committed relationship for years.

Over a period of two years, they had been living undisturbed in a small community in eastern Cameroon where they moved in 2016 to be out of sight and safe from violence. For while, the move was a success.

In the peace and quiet of eastern Cameroon, their relationship blossomed. They had nothing to fear, they thought.

It was a contrast with the busy city of Yaoundé, which Eva and Marie left four years ago after their families rejected them after learning that they two women were in love with each other.

Their enjoyment of a quiet, peaceful life ended in August 2018 after they attended a friend’s party in downtown Bertoua. That night, when the time came to go home, Eva called for a motorcycle taxi. As they waited for it to arrive, they hugged passionately.

“We were both standing on the sidewalk waiting for the bike. I was wearing a black mini dress and my partner in pants. I was glued to her, caressing her body, while she had her hand around my waist. This  behavior aroused the curiosity of police officers, who concluded that we were homosexuals.”

The officers demanded to see their papers, then arrested them.

After Eva and Marie had been in custody for two days, police offered to release them if they paid 200,000 CFA francs (about US $334). They didn’t have the money, so they were put on trial, convicted of homosexual activity, and sentenced to two years in prison with a fine of 138,000 CFA francs each (about US $238 each).

They are scheduled to be released from Bertoua Central Prison in September 2020 — but only if they can pay the fine, which they cannot. If the fine isn’t paid by that point, their sentence will be extended as they work it off.

Life in Bertoua Central Prison is grim and dirty. Food is scarce.  Like all the other prisoners, Eva and Marie must get by on just one meal a day. They’re malnourished, plagued with eye pain and with stomach aches. They are confined in separate cells in the women’s section of the prison.

This blog’s Not Alone / Pas Seul project is raising money to provide Eva and Marie with supplementary food and to pay their fines so they can leave Bertoua Central Prison on time in September.

The author of this article, Courtney Stans, is a journalist in Cameroon who writes under a pseudonym. Contact her at [email protected] 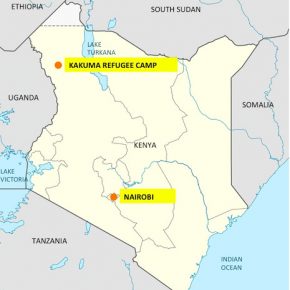 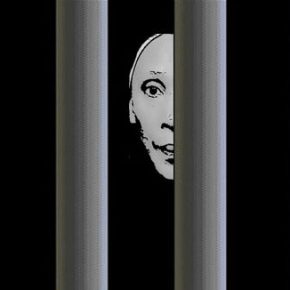