A trans woman named Col is one of three imprisoned victims of Cameroon’s homophobia who face extended prison time because they cannot afford to pay the fines imposed on them for violating the country’s anti-homosexuality law. With your help, all three can get out early.

Col is effeminate, with a thin face, large eyes, short hair and neither a beard nor a mustache.

Born as a man, biologically, she identifies as a woman.

A year ago Col would only go out at night, which helped her avoid harassment because of her appearance. That was also the time to ply her occasional trade as a sex worker.

Then, last summer, she was arrested, convicted of violating Cameroon’s anti-homosexuality law and sentenced to a year behind bars at Bertoua Central Prison.

At age 30, more than half-way through her one-year prison sentence, she is having a hard time, in part because she is assigned to a cell on the men’s side of the prison and must wear men’s clothes.

“At the age of 18 I started to assert myself as a woman. My family immediately blamed me and refused to accept my choice to identify with the opposite sex. I  chose to leave the family home in Ayos voluntarily and then settled in Bertoua in order to make my living.”

She survived by doing sex work on the streets while dressed as a woman. She lived in a modern apartment which she never left during the day. She spent her nights at sex work, then rested at home all day.

She recalled the day of her arrest:

“The scene takes place on July 19, 2019, when I am approached by a police patrol asking me to identify myself. When they saw my first name and photo on my national ID card, they asked me what I was doing on the road at 3 a.m. They quickly concluded that I was a man dressed as a woman and was doing sex work. I was taken into custody for three days.

Col was then tried, convicted and sentenced to one year in prison plus a fine of 106,000 Central African francs (about $177).

In the meantime, Col says, “I am abandoned to myself in prison, bough I sometimes receive visits from my friends who support me in this harsh ordeal of life. I have to wear men’s clothes here in prison so as not to be mistreated by other prisoners and the guards.

“Like all homosexuals, I am not appreciated but I am not either abused.

“The quality of the food is not good, but I have no choice but to eat it. I have skin problems and the onset of genital warts.”

When Col leaves prison, she always wants to leave sex work behind her.

“I would like to train in the hotel industry and have a home when I get out of prison in order to give up sex work and earn a decent living as a transgender person,” she says.

This blog’s Not Alone / Pas Seul project is raising money to provide Col with supplementary food and to pay her fine so she can leave Bertoua Central Prison on time in July.

The author of this article, Courtney Stans, is a journalist in Cameroon who writes under a pseudonym. Contact her at [email protected] 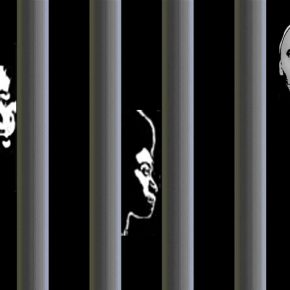