This is Long’s discussion of the bill in his “A Paper Bird” blog:

Egypt’s crackdown on transgender and gay people started almost exactly four years ago, just a few months after General Abdel Fattah el-Sisi seized power. I wrote [in the “Paper Bird” blog] about its first stirrings  — a police raid in mid-October 2013 on an allegedly “pervert”-owned gym in a working-class corner of Cairo, followed by another raid on a party in a somewhat tonier suburb. The arrests have widened ever since, too many and too brutal for me to chronicle.

Moral panic has become a mainstay of the dictatorship’s legitimacy. Now the country’s Parliament seems likely to debate a bill aimed at punishing, jailing, extirpating anything even remotely connected to homosexuality.  It’s reminiscent of Uganda’s notorious Anti-Homosexuality Act (remember that?), which kept the international human rights community mobilized in opposition for years. In some ways, perhaps, it’s more dangerous; for here’s a government utterly contemptuous of foreign or domestic opinion, armed with enormous surveillance capacity (much of it courtesy of the United States) and limitless police power, already experienced at repression, ready to repress more.

The draft bill was submitted last week by MP Riad Abdel Sattar, along with at least twelve other sponsors. Here is the text, as published in Masrawy, an Egyptian web portal.

Article One:
In this Act, homosexuals [mithliyeen] shall refer to any sexual relationship between the same sex, either two or more males or two or more females.

Article Two:
Any two or more persons, either male or female, who engage in perverted sexual relations between themselves in any public or private place shall be punishable by imprisonment for a period of not less than one year and not more than three years. In the case of a repeat offense, the penalty shall be imprisonment for five years.

Article Three:
Any person who incites homosexual relations by any means, whether by instigating, facilitating, or preparing a place to practice them or encouraging others to engage in them, even if he is not practicing them, shall be punishable by imprisonment for a period of not less than one year and not more than three years. In the case of a repeat offense, the penalty shall be imprisonment for five years.

Article Five:
It is prohibited to carry any symbol or code for homosexuals, or to manufacture, sell, market, or advertise it. Anyone who violates this shall be punishable by imprisonment for a period of not less than one year and not more than three years.

Article Six:
The penalties contained in the preceding articles shall be followed by a period of probation equal to the duration of the sentence. [Probation, or “monitoring,” in Egypt is inflicted on convicted persons after their release from the penitentiary. Usually, throughout the period of probation, the person must spend every night at the nearest police station, from dusk to dawn. This provision effectively doubles the prison sentences.]

Article Seven:
The penalties in the preceding articles will be accompanied by their publication in two widely published daily newspapers.

Just read it again, right down to the obligation of an unfree press to participate in public shaming. It’s total, totalitarian, comprehensive.

Riad Abdel Sattar is an idiot whose most notable recent legislative initiative was a proposal to force all Facebook users to register with the state and pay a monthly fee. This, he said, would help Egypt “fight terrorism” by “revealing who uses the site correctly and who uses it wrongly against state institutions.” The Wipe-Out-the-Queers bill is born of similar paranoia.

He is, however, an idiot with some influence. He belongs to the Free Egyptians party, the largest single faction in Parliament. Created after the Revolution by the telecommunications billionaire Naguib Sawiris, the party proudly sells itself as secular, liberal, pro-market, committed to democracy. It therefore supported Sisi’s military coup. (Early this year, Sawiris found himself expelled from the party he’d founded and funded, essentially for showing insufficient pro-Sisi enthusiasm. He suggested jealously that the President had taken over the Free Egyptians the way the state might nationalize a business.)

Sisi is a semi-fascist if not a full-blown one, but he has a peculiar relationship to politics. The Nuremberg rallies, the mass and the mob, are not his style. Unlike the country’s previous dictators, he has not formed a party of his own to mobilize (and reward) supporters. He prefers to let Parliament look divided and vaguely pluralist, while pitting factions against each other and encouraging splits in any group that (like the Free Egyptians) sustains a following. This reveals the essential nature of his regime. Sisi’s government distrusts its own people deeply, disdains any elected official who must address the despised and unruly people, puts exclusive faith in its military and security cadres, and rules through brute force. Instead of cultivating a party of devoted politicians to help keep him popular, Sisi lets the politicians compete, grovel, and cower in the dirt to court him.

Riad Abdel Sattar is good at this. He knows he needs Sisi’s favor in order to enjoy the petty privileges of parliamentarians (he appears to spend a great deal of time finding well-paid jobs for his many relatives). So he’s mastered the regime’s distinctive language, its copulation of moralism with militarism. Introducing his bill, he “stressed the need for the family, school and religious institutions … to spread the true religious awareness and alert society to the seriousness of homosexuality.” He also said that “moral deviance” is “no less dangerous than violence and terrorism. It is even more dangerous to society.” This is Sisi’s liberal, secular Egypt, hailed by American neoconservatives, showing its freedom and beauty.

It’s sometimes said that, at present, “Homosexuality is not explicitly criminalised under Egyptian law.”  This is a misunderstanding.  Very few laws around the world explicitly mention “homosexuality.” Most laws on same-sex sexuality are antique and arcane ones, using terms like “sodomy,” or “buggery,” or “acts against the order of nature.”  Yet that doesn’t mean they fall short of criminalizing homosexual acts.

Egyptian law currently penalizes fugur or “debauchery,” a similarly vague word: the punishment is from three months to three years in prison.  A 1975 ruling by the country’s highest court expressly defined fugur as non-commercial, consensual sex between two men. That ruling is repeatedly cited by prosecutors and courts today, in condemning trans and gay suspects to prison. (In the current crackdown, judges have tacked on multiple convictions under related provisions to give cumulative prison sentences as high as twelve years.)  In that sense, fugur is not much different from “sodomy” — a term that has meant many things over the centuries, including sex between humans and animals and between Christians and non-Christians, but has always included sex between men, and has been used to punish it.

The proposed new law builds on the existing prohibition of fugur.  The only counter-argument being posed in Egypt that might actually obstruct its passage is that it’s simply unnecessary, because the current laws are enough. Thus Shawki el-Sayed, a constitutional lawyer, told the press that the existing “provisions of the Penal Code are sufficient to deter homosexual practices.”

But of course the draft bill goes further. It penalizes women; it criminalizes virtually any discussion, conversation, meeting, or article of attire that might in some way encourage or even involve homosexuality. And its explicit naming, or renaming, of the crime is symbolic but crucial. Note that the bill and its sponsor use the relatively recent, neutral Arabic terms for “homosexuality” and “homosexuals” — al-mithliyyah al-jinsiyyah, al-mithliyeen, literally “same-sexness” or “samers,” neologisms that are more or less exact translations of the English words. It prefers these to pejoratives such as “sexual perversion” which up to now have generally been employed both by the newspapers and the courts.

This is not a victory for political correctness. The aim of the bill is to eliminate the way of thinking, the frame of mind, in which neutrality and those neutral words are possible. It invokes the terms in a kind of incantation, to exorcise and extirpate them. Of course, this means eradicating people. The President of the Cairo Court of Appeal urged Parliament last week to “deal with this abnormal phenomenon and to impose appropriate sanctions on it so that we can eradicate it completely from this society.” The language of elimination spreads.

Moral panics kill. I’m banned from Egypt, and my connection to the place now is mainly through the social media communication that the law promises to make a crime; but among my friends, among people I know on the Internet, I see a small but disturbing number talking, not idly, about suicide.

Now the Wipe-Out-the-Queers bill sits on the Cairo desk of the Speaker of Egypt’s Parliament. The Speaker himself, Ali Abdel-Aal, is not there. He is in Washington, D.C.. He flew there on Friday, for a series of meetings with members of the U.S. Congress, about bolstering bilateral relations. His visit has largely gone unnoticed. Human lives tend not to come up in these discussions. 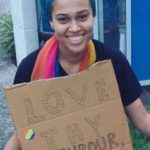