A hostile confrontation, or worse, could have erupted when separate groups of Christian marchers and LGBTQ counter-protesters took to the streets of Bridgetown, Barbados, last weekend.  Instead, a prayer session broke out.

In the following account, counter-protester Luci Hammans describes the prayerful, supportive conclusion of the day when the Christian youth group Hannah’s Mission, in association with Youth For Christ Barbados, marched for morality and to “reclaim the rainbow” as a symbol of God’s covenant.

Today [Oct. 28] I went home to don my Doc Martens, my rainbow eye makeup & my placards of ruthless

Barbados counter-protester declares “Stop RH Hating.”LGBTQ unapologeticness and headed straight (haha) to a counter-protest that a few friends and I sort of organized on Wednesday.

We organized it after reading an article in the newspaper stating that a Christian group was intending “to bring hundreds of young people to the street” in order to protest our nation’s declining morals and reclaim the rainbow.

Our signs countered their message:

First of all, “The rainbow ain’t yours to reclaim.”

Secondly, “Our sexuality should not in any way affect your morals.” (Mine)

Thirdly, “Stop RH Hating.” [That’s a cultural joke. “RH” is short-hand for  “rasshole,” a swear word commonly used by Bajans. It also stands for “Road & Highway” which was used in a popular campaign based on the pun “Stop RH Littering.” So our artists, being the innovators they are, reconstructed the sentence to make it pretty apt. ]

And we went to it, all 10 to 15 of us, with our rainbows and our signs and our Super-Gay and allied selves. We walked behind the march, providing solace and solidarity to all the people who saw and heard the Christian demonstration and knew there was a coded message of intolerance to queerness at its core.

To every person whose face went from one of discomfort and pain when they heard the original protesters’ message and then changed to nods of support and smiles of happiness, or thumbs up of appreciation to our #Pride posse, yuh all — we were there for you.

But the mad thing was that the Christian marchers didn’t say anything outwardly homo/transphobic. It was almost as if our presence was enough to police any potential bigotry.

It was almost as if seeing that we were real people with faces and laughs and friends stopped the usual rhetoric of “homosexuals are the cause of our moral decay.”

Like literally NO one said that, or anything of that ilk. The closest we got was “Protect us from Sexual Perversion” but queerness isn’t a perversion, so SWERVE!

After that, several leaders of the first march confronted us, asking why we came. We told them, “Reclaiming the rainbow — dude, seriously?!”

They basically went, “Yeah, that was a miscommunication in the article and we’re sorry if we upset you.” (I’m paraphrasing them wildly.)

This then transcended into a conversation about how the church and LGBTQ+ groups can start a dialogue rather than have constant conflict and antagonizing discourse. At this point, our group reminded their leaders of the church’s responsibility to LGBTQ people (especially young people who may feel marginalized in their congregation) as representatives of a faith that preaches love and compassion.

And you wanna hear something, yuh all? Those leaders, those 4 men, listened to us and showed us true care and compassion.

One even said, “We need to hear what you have to say,” referencing future talks between the two groups.

They then invited us onto their stage and prayed, not for us to be “healed” — we warned them that, if they tried that, it wouldn’t end well — but for the church’s forgiveness in having a large part to play with the marginalization of queer people in our nation. They prayed for guidance to become more welcoming and non-judgmental individuals, especially in relation to the LGBTQ community.

Lastly, they thanked us for being in their presence and basically making them check themselves, then blessed us as individuals that all our endeavours may succeed and that we be protected.

Growing up as a queer kid in a Christian Caribbean society ain’t easy, fam. And to stand, alongside my friends and fellow activists, and see about 100 people looking back at us, and knowing that your existence is against their literal Bible. … Ting! but yet here they are, with their arms up, praying that you have a great career and all the successes in your love and life.

And my friends (some of whom I only met on the day) did that. My bad-ass friends, my bad-ass colleagues in keeping away the bigotry, with their bad-ass selves came out, handed out stickers, made placards, and challenged church leaders to do better by their congregation and do better by their faith by embracing, with open arms, the LGBTQ+ community in Barbados and for one night, they did.

And that was one hell of a success.

So I salute you all, rock stars, and hope that this little recount of what went down can inspire someone out there that once you make a stand in what you believe in, magical things can happen.

And it’s mad cuz I feel like that damned adage I heard over and over again just the other day might just be true:

How will YOU face what you need to change?”

Luci Hammans  is a gender- and sexuality-diversity activist in Barbados. 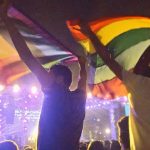