Trouble was all that four desperate Ugandan LGBTI refugees found when they tried to escape from the homophobia and food shortages of Kenya’s Kakuma refugee camp. In June, they traveled 1,000 miles to Malawi, where they hoped for relief.  Instead they found more hunger and more homophobia.

Now they want to return to Kakuma. Mbazira Moses, executive director of the camp’s LGBTI support group Refugee Flag Kakuma, is trying to raise money to pay for their return trip.

At Kakuma Camp, hundreds of LGBTI refugees are surrounded by tens of thousands of other refugees, many of them from homophobic East African countries.

Timothy Hobbs Kayiwa, the informal leader of the travelers, said that he and two other members of the group had saved 50,000 Kenyan shillings (about $500), which they gave to a truck driver “whom we told to take us far away from East Africa.” He drove the four men through Nairobi to Tanzania. From there, a friend of the driver took them to Lilongwe, Malawi.

They applied to the Malawian government for recognition as refugees, but were denied. They turned to the office of the U.N. High Commissioner for Refugees (UNHCR), which told them to return to Kenya. That will mean round-trip travels of about 2,000 miles and round-trip expenses totaling nearly $1,000, just to get back to where they started.

Malawian officials let them sleep in a bare room for a while, but told them they needed to leave in July. Two of the refugees needed medical care, which left no money for food, Kayiwa said.

“The situation out here is very difficult and way to challenging, just like at Kakuma Refugee Camp,” Kayiwa said. But at Kakuma, “at least they recognise our case.”

“UNHCR and the government of Malawi failed to register us. They have too much homophobia,” he said.

If anything, the homophobia they encountered in Malawi was worse than that in Kenya, Kayiwa said.

Mbazira Moses set a fundraising goal of $450 to get the men back to Kenya. So far, he has collected about $150. Donations can be made in the form of M-Pesa mobile money at +254799266789. For other methods of donation, contact Mbazira Moses at [email protected] 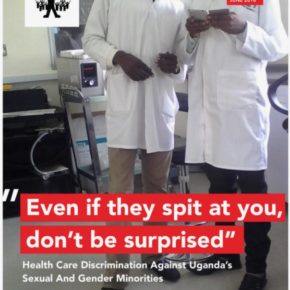