Eighteen Ugandan LGBTI refugees in Kenya have been arrested, abused and sent to the Kakuma refugee camp, where they face the prospect of further abuse by thousands of homophobic refugees who are also confined there, the O-blog-dee LGBTI rights advocacy blog reports.

REPORTING IN REAL TIME AS EVENTS UNFOLD:   Proving that UNHCR (United Nations High Commissioner for Refugees)  is not able to provide adequate protection for Africa’s LGBT refugees: For several years LGBTI refugees have been denied the guarantee by UNHCR that they can be protected within the refugee system. It is now time to make a special plan to accommodate and provide safe shelter for LGBT Refugees.

As I write this, 18 young LGBTI refugees are being driven to Kakuma Camp in Kenya, after being detained for over 48 hours, in deplorable conditions – beaten and threatened with death by Kenyan police. These young people had been living as urban refugees in Nairobi because Kakuma camp is not safe for LGBT people.  And now, after being evicted from urban residences, and camping outside UNHCR gates for nights on end,  and then detained, they are being returned by police to the camp, where they believe their lives will be in danger.

Unlike heterosexual refugees who are guaranteed safe harbor by host countries and UNHCR, it is apparent that it is almost impossible to provide LGBT refugees any protection, least of all, equal protection.

Since 2014, when President Museveni signed the now defunct Anti-Homosexuality Act, (dubbed “The Kill the Gays Bill” ) into law, hundreds of outed and persecuted LGBT people escaped Uganda. For most, the only option was to cross the Kenyan border to seek UNHCR protection and resettlement.  Many have been resettled abroad after waiting years in unsafe and continued persecutory conditions. However for those who remain and for new arrivals, life seems bleak and hope is dwindling.  The financial means needed to support these refugees in urban areas has proved to be unreliable and irregular. UNHCR has attempted to provide autonomous economic programs for the LGBT refugees, but it is now clear this has failed.     Even those who have been resettled in countries such as Iceland, USA and Canada, will speak to the challenges , difficulties and atrocities they experienced as refugees, in a system that fails to provide LGBTI people with adequate support and protection.

In general when a refugee escapes war or persecution by entering a host country, they can be assured of support and protection, as by crossing a border they have hopefully escaped their persecutors. However when you are  lesbian, gay or transgender – and reside on a continent where 34 countries criminalize you, its almost impossible to find safe haven in a host country, causing an enormous challenge for refugees , human rights organizations and UNHCR.  There is no solution at this time. Gay, lesbian, bi-sexual, intersex and transgender people in Africa are trapped. No matter which way they turn, even when showing up to UNHCR, very few are guaranteed safety.  The arrest and unconscionable treatment of the 18 refugees by Kenyan police proves this problem!

At this time, in order  to survive, LGBT refugees in Kenya are forced into situations where they are compelled to prostitute themselves for a plate of food and a night in a bed. This is also causing the rise in HIV + among the LGBT refugee population. This situation is reprehensible. And the global LGBT community at large needs to do much more to advocate for and support our brothers and sisters.

The only ultimate solution, which does not exist at this time, for lack of resources and perhaps a lack of motivation, such as genuine solicitude, would be for UNHCR to provide a special protected camp or fully sponsored safe shelter exclusive for LGBTI people in several African countries, such as Kenya.  What is needed is  an environment that would protect LGBTI refugees, from local populace,  local authorities, police, and heterosexual refugees, as many seem to support the extermination of gay people.  This is critical as all refugees, most of whom are refugees because they have been traumatized in home countries,  deserve a safe haven while enduring the extreme vetting process to get them resettled in countries willing to accept them.   Lest we forget that the reduction in United States refugee resettlement numbers and delays caused by the Trump administration has only served to exacerbate the problem.

Now, while writing this, I am speaking via internet chat to one of the detained refugees as he sits on the bus taking them from Nairobi to Kakuma. The refugees were evicted from their urban shelters and forced to camp outside UNHCR gates, some declaring they had nowhere else to go, and others protesting security  issues and the failure of UNHCR to provide protection. Several had been evicted from their shelters in Nairobi because they were unable to pay their rents. They simply had nowhere to go. While writing this – the refugees are still in police custody for the 4 hour ride,  (see pic below) – all terrified, knowing the dangers of the dreaded Kakuma Camp. This is an horrendous “Catch-22” situation: The Kenyan Government does not want any refugees in urban areas,  least of all the gay people who they criminalize –  and the straight refugee population (mostly Sudanese war refugees) do not want gays in the camp.

So where do they go?

I am transcribing my chat here to reflect the words of the young refugee who is communicating with me via internet chat, while on the bus:  I will update this story in real time, as it unfolds, in the meantime:

We are being taken to police now

They arrested us on Tuesday Morng outside UNHCR and we were taken to the police. In the first police we spent their 21hours and in the second police Station we spent their 23hours . They refused to take us to the court, we didn’t not do any statement at any police situation we were beaten by them.

So we don’t no what to do. Please help us out.

On what we got from the first police they said that they will kill us and others are being killed, on the second police station we sleeped standing  because when we reached at the station they filled the all room with water when they are saying that we are gay men we need to die, let me try getting you the photo as much as i can and we were arrested 18 people. 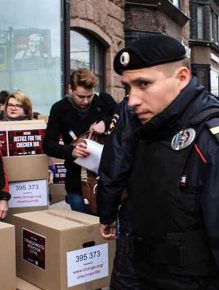