Abandoned and abused in Uganda, trans woman Alexis Sekamate fled to Kenya in 2015. At the Kakuma refugee camp in Kenya, she endured a life of homophobic snubs, insults and violence from other refugees — “a complete hell,” she says. Then she escaped to Nairobi, where she is hiding out.

This is her story, as told to Simon Kwesigabo, a fellow refugee who has been resettled in the United States.

Call me Alexis Sekamate, which is the pseudonym that allows me to tell my true story without fear of reprisals.

I was born on Feb. 10, 1988, in Kawempe, a suburb of Kampala, the capital of Uganda. My education prepared me for work as a primary teacher.

I am a trans woman who got married secretly to a gay man on Aug. 21, 2013. We kept the wedding ceremony a secret because in Uganda, like many other African countries,  marriage between two LGBTI people is  forbidden. It is seen as a sin.

A few months after my partner and I tied the knot, things exploded in the community. People learned what had happened and they were outraged that two gay people had wed in secret, especially after they saw photos and video of the ceremony.

When the news reached my family, they weren’t happy about it. My family decided to disown me. My partners’ family, however, stood by him. Since they were well off, they decided to fly him out of the country. That left me alone.

I could think of no option other than to flee from Uganda to Kenya. I opted to stay in the Kenyan refugee camp, because I feared that living in a Kenyan community would be no different from Uganda. I thought it could be safe for me in the Kakuma refugee camp.

On June 15, 2015, I was taken to camp after having stayed in Nairobi for three days under the protection of the Office of the U.N. High Commissioner for Refugees (UNHCR). On reaching Kakuma Camp, I was registered and my life as a Kakuma refugee got under way.

I found other LGBTIQ Ugandans there, but we were not at all happy about how other people treated us at the camp after they realized who we were. Personally, there is no way I could not express who I am. I am a trans woman and cannot deny it.

I was beaten up various times by homophobic fellow refugees. I was  hospitalized, tried talking to people in charge at the camp, but they saw nothing they could do to assure my safety. There wasn’t a special section of the camp where I could stay and be assured of living safely and peacefully.

After a few months at Kakuma Camp, I felt I couldn’t handle it any more. I decided to flee back to Nairobi, where I had heard there is more protection for trans women than in the camp.

In March 2016, I tried to escape from the camp. I got past the first, second and third roadblocks. But then, because I did not have documents authorizing me to move away from the camp, I was detained by police and taken back to camp.

Life there became a complete hell for me. My days were filled with snubs, insults and violence from homophobic refugees.


After a few months passed, I again tried to escape. That time I was put in prison for two weeks. By September 2016, I felt like committing suicide. It was the worst time of my life, but I never fully lost hope. I kept thinking on how to escape from that dungeon, which is what Kakuma Camp felt like to me.

A colleague in Nairobi managed to raise money for me. Combined with what I collected, I had more than 8,000 Kenya shillings (about U.S. $80). I left the camp again. Whenever someone stopped me, I gave them some money.

I took a bus past all the roadblocks, paying a bribe at each one. It took me three days to get to Nairobi. When I got there, I had spent nearly all the money. After all those struggles, I reached Nairobi on April 27, 2017, and went to UNHCR. I reported that I had fled the camp. I was told I could be sent back there.

I went to a friend’s place to avoid detection. Most of the time I stay indoors so I won’t alarm his neighbors. I worry about the moment they realize who I am and blow my friend’s cover too.

The author of this article, Simon Kwesigabo, is a Ugandan refugee who  recently relocated from Kenya to the United States. 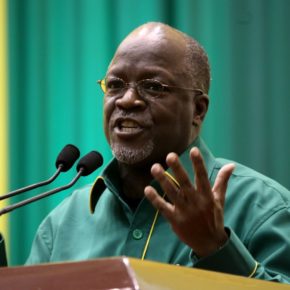