Kamarah Apollo is a gay Ugandan refugee in Kenya who is currently awaiting relocation to the United States. Here he tells his story:

‘Through fear, still we stand’

I am a gay activist from Uganda.

I was born in 1988 and raised as the youngest in a family of six siblings. In 2010, at age 22, I was mercilessly expelled from school because I’m gay. That exposed my identity in my fierce neighborhood that doesn’t tolerate homosexuality.

When they found out that I was in a relationship with a fellow male, I was rejected by my family due to cultural norms that consider queers a bad  omen.

I left home with no options, subjected to the stigma and bullying of homosexuals in Ugandan society.

As a wanderer on the street at the young age of 22, I was exposed to unbearable conditions. I was arrested by police and other security personnel. I became one of Kampala’s sex workers in order to survive.

As a victim of Uganda’s attacks on my gay identity, I eagerly joined activists in  defending our rights as citizens. To my surprise, that activism in defense of sexual minorities was harder than leading a donkey over the Himalaya mountains. People considered it ridiculous to defend acts that many African countries consider evil.

I was arrested and accused of promoting homosexuality. I was imprisoned on several  occasions and tortured by police. One day I was roped, caned, pierced with pins, and verbally abused. At sunset, I was dumped back in the cells, where an inmate used the opportunity to rape me, a defenseless boy.

After two days with no food in a cell at Kira police station, a team from the Human Right Awareness and Promotion Forum (HRAPF) bailed me out on police bond.

Once out the cell, I still felt its chill floor and the fresh wounds on my innocent body. I knew in my gut that I needed to work to stop the abuses of human rights and raise awareness of the need for human dignity in our motherland. I therefore joined with three friends who also faced similar wickedness; together we formed Kampuss Liberty Uganda to advocate for the rights of men who have sex with men (MSM).

During the debates about the Anti-Homosexuality Act of 2014, I appeared on local broadcasts, which exposed my location and my physical appearance. I successfully evaded several arrest warrants from the police.

In January 2015, neighbors gathered and decided to burn me inside my house. I survived by jumping through the toilet entrance in the courtyard.

I then boarded several means of transportation that took me to the Kenyan border at Busia. As if by a miracle, I clandestinely trafficked myself into Kenya.  After a further week of trekking, I reached Nairobi. There I was given food by Congolese refugees and advised to report my case to the offices of the U.N. High Commissioner for Refugees (UNHCR).

I was registered as an urban refugee along with many other gay Ugandans. We joined each other for psychological relief. Together, we strive to rebuild our future. We consider ourselves to be one family, committed to protect each other. I was privileged to be elected as our leader. We launched an enterprise making handicrafts, but it was shut down for not having work permits and a business license, which we could not afford.

Our situation is worse than hell — we are juveniles in a foreign country, illiterate, unskilled, jobless, handicapped by language barriers. Life in Kenya is so stressful that every sunrise brings a pool of tears to each eye. Each boy or girl cries out about the brutality of Kenyan police, whose abuses are encouraged by Deputy President William Ruto’s insistence that Kenya will not tolerate gay practices.

He loudly proclaims that Kenya has no room for gays, and his threats go unchallenged by President Uhuru Kenyatta or anyone else in the ruling Jubilee political party.

I have spent almost two years waiting for action on my relocation application. Recently, I was fortunate enough that the American Embassy approved my case. I have been granted resettlement in the USA. The International Organization for Migration (IOM) and the U.S. Refugee Support Center (RSC Africa) are handling my case.

I have now passed my medical assessments and am awaiting my flight to America.

I am happy to be moving to the United States, though I know that it’s so expensive that paying the bill will be a challenge.

At the same time, I am pained at the thought of leaving my fellow Ugandan LGBTI refugees in Kenya, because life here is so hard. 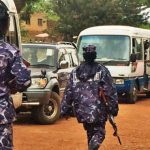