Prominent Ugandan (former) LGBTI activist Val Kalende says she was lured into homosexuality by Satan, and now regrets it. She has renounced her “lesbianism” and LGBTI activism, and is set to wed a man in church “soon.”

In the past, Kalende  fought hard along with activist David Kato (RIP) in 2009, battling against the now-annulled infamous Ugandan Anti-Homosexuality Law at home and abroad.

But now she has told a gathering of evangelical Christians and live on television in Kampala that she is no longer gay. (See also “Popular Ugandan LGBT activist says she’s no longer a lesbian.”)

She asserts in her social media posts after the renunciation that God’s initial plan was for a man to be married to a woman, or vice versa. She hinted at Pastor Bugingo’s Church that some members of the LGBTI community in Uganda wanted to harm her, and had to choose to make her move out of activism public.

It is not the first time a member of the Ugandan LGBTI community has renounced activism and joined the evangelical Christianity movement. In 2009 prominent Ugandan gay activist George Oundo caused a stir when he gave media interviews claiming that homosexuals recruit children into homosexuality. His carefully planned allegations fueled anti-gay hatred. Evangelical Christians soon brought forth a private members bill, the Anti-Homosexuality Bill, which was tabled in Parliament by MP David Bahati. In its early, extreme version, it was known as the “Kill the Gays” Bill.

Oundo later fell out with evangelical Christians, claiming in the media that he wasn’t paid all his money and a house he was promised before making his allegations. He asked the LGBTI community to take him back, but had no success, and has since gone back to the evangelicals and has stayed silent.

Kalende’s renunciation has drawn mixed reactions  from the LGBTI community in Uganda and the media. Some LGBT activists called her move a result of poaching from the strong local evangelical Christian movement in Uganda to counter the nation’s significant LGBTI lobby.

Some  activists took to social media to express shock, anger, resentment and sadness at Val’s decision. Other activists have however sympathized with Val’s action, saying there is no clear support mechanism for activists suffering depression and burnout after having worked for year’s in the highly hostile and stressful environment of Uganda. One activist commented about the incident on social media:

“It’s an attempt to want society to take you back. It’s too lonely being an activist and poor.”

Many activists agreed that burnout is a serious problem for activists. Another activist stated:

“I saw her video clip [Kalende’s renunciation]. She is not all right. She looks sad and depressed. She needs help.”

After more than ten years of an intense struggle that has brought some relative relief to Uganda’s local LGBTI community, there are also questions on what happens to activists as they age. Many activists in their 30s and 40s question what’s will be their fallback position after their battle for justice has destroyed their social support network. One activist noted that it gets lonely living in a poor country, when one is no longer working as an activist, but still is poor, abandoned by family and former friends who distanced themselves amid disagreements over the activist’s work and cause.

Local media is reporting that during the “Sunday Service Live” Val also made sensational claims that other LGBTIQ activists wanted to kill her.

She was then a public figure in the Ugandan LGBT rights movement and identified herself as genderqueer.

Kalende once enjoyed a career in journalism as a features writer at the Daily Monitor, one of Uganda’s leading independent newspapers.

“I was born in Kansanga and have relatives in Kyebando. I joined lesbianism right after Makerere University. I’m born of Christian parents. All of them cut their ties with me for being gay. I became an orphan,” she narrated.

“I became rebellious. We always wondered why the world forced us to become girls who do not love men. We were even arrested from a conference and arrested. We were detained at Central Police Station and even taken to court.”

Val even left her job at the Monitor to pursue her gay career. She was taken to the U.S. during the time of Barack Obama to visit different gay organisations.

“Right now, I have no peace of mind. I sometimes break down and cry wondering why am like this. I’m now back home and have been saved,” she said.

She says gays make one believe one is loved, but in the end they break one away from friends and family.

It was in October 2007 when Kalende chose to leave the paper to focus on LGBT rights activism.

Kalende put her journalistic skills to use, conducting community-based research into the needs of LGBT people in Uganda through organisations including Freedom and Roam Uganda, and Sexual Minorities Uganda (SMUG).

In 2010, Kalende began four years of travel between Uganda and the United States, attending human rights conferences and speaking engagements.

But it was not until the passing of Uganda’s infamous Anti-Homosexuality Act in February 2014 that Kalende considered leaving their homeland for good.

Val has also been associated with At Kuchu Diaspora Alliance, a network of Ugandan LGBT people in the Diaspora that seeks to  “amplifying the collective voice of our movement,” a slogan that is representative of the collective power of solidarity. 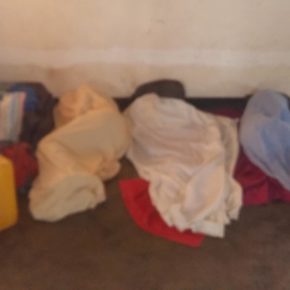