“From the frying pan into the fire” — that’s how some LGBT refugees described the experience of fleeing to Kenya to escape from homophobic violence in Uganda. Most LGBT refugees in Kenya experienced something like that, even if it wasn’t as extreme as the vivid old description suggests.

This is the story of Rolland Sekitoleeko, a 22-year-old gay Ugandan who fled from the homophobia of his native country to seek a better life in Kenya. What he found wasn’t what he expected. This is his story, as told to Alexandria Carter, another LGBT Ugandan refugee who, like Rolland, is also hoping to be resettled in the United States.

When I fled to Kenya back in 2015, I thought life would be easy here.  I thought I could come and go as an openly gay person, not worrying about what people might do to me.

That was a fantasy, I’ve since learned. But at first, life in Kenya was smoother for me than it had been in Uganda because, as a refugee, I received US $60 a month to live on. I thought I could get by on that, perhaps with help from other gay people whom I would meet in Kenya.

But, as it turned out, the money wasn’t enough. I didn’t know this country and how expensive it is.

Refugees were encouraged to join together with two or three like-minded people so that we could afford a place to stay. I had no any other options than to get on board to survive.

On many different occasions we were told to look for jobs to help us meet our expenses. But it wasn’t easy, despite what many people kept on telling us. Finding work as a foreigner in Kenya is really hard, even apart from language problems, which I had.

My fellow gay friends and I urged the HIAS refugee agency to increase the monthly amount they gave us for support. But nothing changed.


Nothing changed until early in the summer of 2016, when we were told we could instead be getting only $45 instead of $60 a month. The agency said they weren’t in a position to keep giving us the amount they had been giving us.

This news struck me down as if I had had a heart attack. I looked all around for ways to support a refugee’s life in a country that has a very high cost of living.

I went job-hunting for almost a month. Luck wasn’t on my side. A lot was required and I couldn’t speak Kiswahili. I gave up, since no one would hire a foreigner who can’t even speak their language.  I worked hard for the next few months, trying to learn at least the basics of the language.

Then I again tried to secure a job to help me survive. In the end, after a month of failures, I was contacted by a man who offered me work as a house boy. It was an opportunity I couldn’t decline.

I couldn’t believe that this time around the Lord had heard my prayers. I met with the man and we agreed he could pay me $30 a month. It wasn’t much, but there was nothing else I could do.

The job would allow me to survive while I awaiting my security interviews with RSC Africa [the U.S. refugee admissions program].

Working as someone’s house boy isn’t great, and the pay is so low that I feel I am being exploited. I work without any rest for a full week.

But I have no other options for earning the money I need, since my monthly support from HIAS now is so small. Life goes on.

Alexandria Carter, the author of this article, is an LGBT Ugandan refugee in Kenya who writes under a pseudonym. 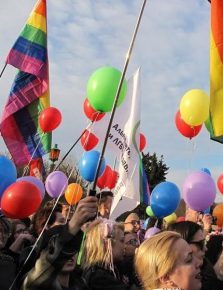