Scarred by beatings in Uganda, LGBT refugee Kwesigabo Simon has been approved for resettlement from Kenya to the United States. Here he tells his story:

I was born in Uganda, in the southern Masaka district in Kalisizo sub-county, to unknown parents. They abandoned me as a baby.

I was raised by Mr. Gabunga Mbanji, a farmer who already had five children. He struggled to pay my expenses, especially school fees. I left primary school at about age 7.

For my first 17 years, before I moved to Kampala, people didn’t discriminate against me. Then my older sister urged me to join her in the city, which I did in 2013. My sexual orientation started attracting attention; I wasn’t able to hide it from our neighbors.  I decided to rent a small room in the Munyonyo suburb.

I was lucky enough to have fallen in love with Denis back in Kalisizo. I used to pay visits to him in Kalisizo, but our relationship eventually attracted the attention of neighbors there. At first they thought we were brothers, but one day in May 2013 a fierce Christian neighbor stumbled onto us and was embarrassed by our joyous and delightful times.

He rushed to report us at the Kalisizo police station, where he accused us of having sex. On his way back from the station, he called together what seemed like the entire village. They kicked in our door and chased us out the house. The crowd cursed at us and stripped us of our clothing. A police officer beat us and locked us in a cell with a bare floor.

The officer warned the other prisoners about our sexuality, which made  imprisonment worse. Each night, prisoners beat us in a ritual that they thought would chase out the “queer evil” from our bodies. I was left with a huge scar on my shoulder from all the beatings.

We were each HIV-positive, so the police officers took us to a clinic for a health assessment before facing the court. Fortunately the physician at the clinic was the ex-boyfriend of Denis. He arranged for us to escape, but in the process Denis and I became separated. Since then, I have never seen Denis again and have no idea where he is.

A friend took me in, arranged for a health checkup and allowed me to escape back to Kampala. There I went to work as a waiter in a restaurant. One day in December 2014, when our food supplier didn’t report to work, unfortunately the replacement driver was one of the Kalisizo villagers who had harassed Denis and me.

He reported me to Denis’s father, who came to the restaurant the next day and raised a loud outcry, asking where I had hidden his son after sodomizing him. I tried my best to ignore him, but he did his best to shame me in front of everyone at the restaurant. I was fired, and then things got worse. My landlord, who ate at that restaurant, learned what had happened. He ordered me to evacuate his house. I feared for my life if I stayed in Uganda.

I started looking for a way to escape such a homophobic country. I boarded a bus to Nairobi on Feb. 16, 2015, and arrived there on Feb. 17 to join Kamarah Apollo, an old friend from Kampala.  Apollo had fled from Uganda earlier and already had refugee status in  Nairobi. He helped me to register as a refugee.

I had nothing. In partnership with the United Nations, the international refugee support group HIAS provides some financial assistance to LGBTI refugees in Kenya, but it is irregular. For almost two years, we have been like streets kids in the competitive town of Nairobi. For a while, we made crafts to try to raise money, but that enterprise was shut down. We also had to be wary of public curiosity about our status and hostility to our behavior.

The process at the Office of the United Nations High Commissioner for Refugees in Nairobi is slow. It dragged on for nearly two years, even though, as a victim of unlawful torture, I was supposed to have priority treatment.

Still, I have endured through ups and downs. At last, 23 months after I fled from Uganda, I have almost reached the peak.

I have been approved to be resettled in America.

Kwesigabo Simon, age 20, is a Ugandan LGBT refugee in Kenya who is scheduled to leave Nairobi in mid-February for resettlement in California. 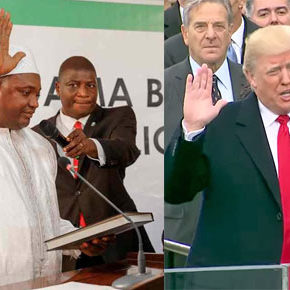