What began as an anti-gay march in Barbados on Saturday ended up in respectful dialogue with LGBT community members and prayers for the community’s success.

A Barbadian newspaper carried a story on Monday, Oct. 23, about a march planned that weekend by religious groups to “take back the rainbow” from the gay “movement.” Ostensibly, the event, dubbed “Stand Up, Stand Out,” was meant to condemn declining morals in Barbadian society. Such alarmist allegations have often been made when there is  increased recognition of the human rights of LGBT people.

Although Barbados has the most draconian anti-sodomy law in the Western Hemisphere (life imprisonment), which it inherited from Britain during colonization, the country rarely records as many anti-gay physical attacks as occur in other states in the region. And the Barbadian LGBT movement is certainly not as visible as in other parts of the Caribbean Community (Caricom). For example, Barbadian Pride events have not been as successful or significant as elsewhere in Caricom, such as the recently concluded Montego Bay Pride or the month-long Suriname Pride.

However, the relatively quiet LGBT scene in Barbados has not stopped the island’s American-backed fundamentalist churches from accusing gays of causing the economic and societal challenges facing the country. This blame is, of course, misplaced. The tourism-dependent micro-state of Barbados was severely impacted by the 2008 global financial crash. There has also been a fall-off in critical tourism arrivals from Britain (a major source of visitors to the island) after the Brexit vote. But LGBT people serve as a convenient scapegoat to blame for difficult structural issues.

Extremist anti-gay campaigns and conferences have therefore been mounted on the island, with significant U.S. funding, threatening certain societal doom if the small minority LGBT population is given their human rights. This imported rhetoric has caused at least one native university professor to claim that the Barbadian way of life is under threat from right-wing evangelists. And the Anglican Bishop of Barbados and Archbishop of the West Indies denounced the actions of Christian leaders who ridicule and condemn LGBT people.  Earlier this month, at the Intimate Conviction conference in Jamaica, he spoke against anti-sodomy laws like the one in Barbados. (“Sodom and Gomorrah does not support sodomy law, says Anglican archbishop.”)

At the invitation of Barbadian activists, international organizations such as mine, the Canadian HIV/AIDS Legal Network, have collaborated to counter these increasing threats to LGBT Barbadians. This is part of the organization’s Caribbean-wide work aimed at eliminating homophobic laws and practices, which contribute to the region having the second-highest HIV prevalence rate after sub-Saharan Africa. Among other initiatives the Legal Network has collaborated on human rights and LGBT sensitivity trainings for the Royal Barbados Police Force and members of civil society as well as helped to launch the Barbados LGBT Pride Weekend in 2015.

The recent anti-gay march served as a rallying cry for some LGBT activists on the island, who decided that enough was enough. They therefore decided to take action.

By the same Monday evening of the news report announcing the anti-gay march, a call went out on social media from a group called “Pride 246” [246 is the area code for Barbados] to counter-protest any allegation that the existence of LGBT citizens was a representation of declining morals and values in society.

On Saturday, October 28, the small group of counter-protesters assembled and followed the “Stand Up, Stand Out” marchers.

The group’s objectives were overwhelmingly achieved, as counter-protester Nastassia Rambarran makes clear in her recollections of the day:

Some thoughts on the anti-gay march held in Bridgetown on Saturday and our counter-protest :

– The march was supposed to be hundreds of people and youths taking back the rainbow from being associated with gays, but they had less than 40 people and maybe 5 youths;

– Their signs were super lame. … I think they realised that blazing rainbow colors would make them look queer, or bigots are allergic to truly interacting with the rainbow;

– About 10 to 15 of us came out to counter-protest and it was glorious. We kept waiting for them to start spouting anti-LGBT hate (they had placards that implied their ‘rainbow-taking’ intentions) but it never came! Us following them behind their march acted as a wonderful deterrent.

– I was afraid the police would question us and tell us to leave since it was obvious after a while that we weren’t with them (and we had no permission to march) but the police was really cool through it all and made sure we observed the traffic rules as well;

– We got some really stink looks at times, especially from older people, and the word bulla [Barbadian slang for gay] got yelled loudly at us at least once but that was made up for by the numerous approving looks, the three young girls who randomly came up to join us but had to leave when we started getting into the bustle of Bridgetown [the capital], and all the rainbow stickers willingly taken by onlookers;

– I was beyond surprised when at the end the marchers came up to offer us water and some of the leaders came over to engage in dialogue. By the end of the night they were actually praying FOR the LGBT community’s success !

-I was honored to be able to join such a feisty, fabulous and passionate group of people to counteract hate. We only had 3 guys in the group, though, and no trans persons that I know of, so I have to wonder how different the reaction from the public and the marchers might have been had the optics of the group been different. Nevertheless, it was wonderful to march in what felt like a mini-Pride Parade!

Nastassia Rambarran is a native of Guyana who lives in Barbados and has a passionate interest in LGBT health research within the Caribbean context.

Could this signal the start of a more visible and vibrant LGBT community in Barbados? Only time will tell. Hopefully LGBT Barbadians and their allies will rise up and reject the swelling tide of imported religious homophobia. Otherwise this hate could wash over the country like a tsunami, leaving wrecked LGBT bodies in its wake, as happened elsewhere in the region.

Related articles about the Anglican Bishop of Barbados and Archbishop of the West Indies: 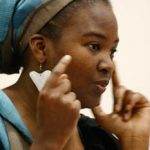 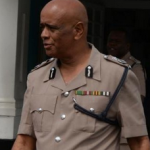