Nigerian journalist and activist Mike Daemon describes how a gay student in Abuja was trapped through an online site and was forced to hand over his mobile phone and all his money. It’s the type of crime that is frequent in Nigeria, where criminals find such abuses easy to commit because of Nigeria’s homophobia and its cruel anti-gay law. 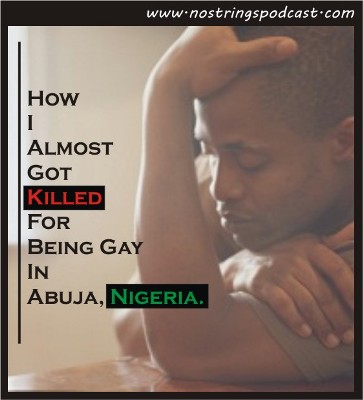 Nigeria is one of the 38 African countries that have criminalized homosexuality. In January 2014, it enacted a law  misleadingly titled the “Same-Sex Marriage (Prohibition) Act.”

The law prescribes a 10-year jail term for public displays of love between people of the same sex and for anyone belonging to an LGBTIQ organization.  Clearly the law is not really about marriage, but about criminalizing human rights and silencing any organizations working to help sexual minorities in the country.

In such country, with no regard for human rights, even the police who are supposed to protect lives and property have taken advantage of the situation to torment and extort money from LGBTIQ community members.

Attacks, brutality, torture, blackmail and even deaths have been reported. Criminals who otherwise seem to be ordinary members of Nigerian society trick members of the community into coming to certain secret venues and then use the opportunity to cause harm.

In this episode, we talked with Eric, a Nigerian gay man who opened up about a homophobic experience he had in Nigeria. He told NoStrings in an interview about how he connected with someone online via  Manjam.com, a social media platform that connects gay men to each other, and that was how the trouble began for him.

“I was in Nigeria, studying for my master’s, and at some point, I got really bored and decided to chat up on the Internet via manjam.com, and there I met a young man. After several conversations online, we exchanged phone numbers and pictures, and soon we were talking on phone. He would call me up all the time to know what I was doing, and where I was. He sounded and seemed like a really nice guy. So at some point, he invited me over to come see him, which I agreed to.

“But when I met him, I noticed that he was not using his real pictures; he looked different in person as against the pictures he had sent to me. I became a little bit worried, and inquired from him to know why he had sent me fake pictures of him, and then he explained to me, that it was not safe to use one’s real pictures on the internet, especially on a platform like manjam. His excuse sounded quite reasonable so I didn’t bother him anymore about it.”

They moved to a bar where they had a brief discussion and a couple of drinks and then finally both decided that they would go to a hotel, which turned out to be a trap:

“Some guys hurriedly rushed out from the toilet and asked me what I was doing, and why I came. …  They started hitting me with the sticks that they had brought, and asked me to take off my clothes, and they started taking pictures and making videos with their camera. The guy who invited me, was just standing there. He did nothing really; he was only telling them to take things easy with me, as they were hitting, slapping and beating me.

As they were taking pictures, and making videos, they asked that I say a couple of things looking directly into the camera, which I did obviously, as I did not want my face destroyed, and possibly get killed.

“Eventually, they took my phone and my two bank cards, got the ATM pin numbers from me, and one of them went to the bank and cashed out all the money I had, which amounted to about 30,000.00 naira [about US$150]. But it was not enough for them, as they said that they needed 200,000 naira, so I told them that if went home, or if they’ll go home with me, that I will be able to get it from my mother for them. Even though I knew my mother did not have that kind of money.

“They asked that I reveal to them about the people I know that are gay, as they went through my phone, I told them that I wasn’t friends with gay people in Nigeria.”

At Eric’s home, the extortionists were foiled:

“My mother was extremely disappointed in me. She is an elderly woman. She didn’t speak much; she only told the guy who arranged the setup to do whatever he wanted with me, that she did not have any money to give him.

“My sister did not believe the whole thing. She thought that it was all an arrangement, that I was doing everything just to collect money from my mother. After much arguments, he knew that he wouldn’t be able to get any more money. He left me with a threat that he had my phone numbers and my phone, and that he would find me eventually if I failed to come and balance him up with more money”.

Eric is no longer in Nigeria; he just couldn’t stay given the homophobic condition of the country. He hopes he will be able to return if things get better in the future.

To listen to the discussion with Eric, download the podcast.

Have you been harassed, assaulted, or abused as a result of your sexual orientation? Please, do not further increase the burden that you experience by suffering in silence. Share your story and experience. Doing this will further expose the horror and agony experienced by LGBTIQ persons in Nigeria. To do this, send an email to info@nostringspodcast.com.

To listen to future discussions or to participate, visit:

Or send email to info@nostringspodcast.com.

Related articles on this blog about No Strings podcasts: