Nigerian Christian Davis Mac-Iyalla, the founder of Changing Attitude Nigeria, pleads for compassion toward LGBTI Christians in this open letter to Stanley Ntagali, the anti-gay archbishop of Uganda:

The Anglican Church of Uganda giving its full support to your country’s anti-gay legislation is a betrayal.

I write to you in the name of our loving and merciful God. I have been following your views on human sexuality for a long time. I so much wanted to meet with you and other African Primates privately during your visit to England this January when you attended the Primates’ meeting, but you appeared to be so fenced around that I could not approach you. Your continued wish to avoid dialogue with the Anglican Communion causes me much sorrow, and I read with great sadness your decision not to attend the forthcoming Anglican Consultative Forum in April.

The problem arises from you and your associates’ misunderstandings of Holy Scripture. Throughout the ages, the Bible has been subject to interpretation, and this biblical interpretation has changed in the lights of science and human experience. For example, Galileo revealed a heliocentric model of the solar system which went against church doctrines of the time. There was once a biblical justification for the enslavement of black people, and yet now the world views this as completely abhorrent. Similarly, you should not be so arrogant as to imagine you have nothing to learn from the theological perspectives of The Episcopal Church or from Canterbury.

I grew up in Nigeria, and lost my job because I was gay. I had to leave my village, my friends and family, and eventually had to leave the country. I suffered death threats and was tortured by the police, all because I was gay. These memories continue to haunt me with pain and sorrow. This persecution of LGBTI people was and continues to be incited and egged on by the Church of Nigeria. As in Uganda, it is the church, a place which should be a sanctuary of love for everyone, which has stoked the fires of persecution. Where is the love of Jesus in this? The heart of Jesus was open to everyone. He embraced sinners and tax collectors alike, and preached a message of inclusiveness. Where is your love?

I find it astounding that you should claim to feel betrayed by the Anglican Communion.  If anyone should feel betrayed it is LGBTI Anglicans in Africa, who have suffered a holocaust of violence and cruelty, incited by people such as you. You are like the Pharisees of the Gospels, following what you think is the letter of the law, while completely missing the fundamental message.

I am happy the South African Church is now accepting and welcoming everyone including us homosexuals. However, I will not rest until all of Africa, and the entire world, has followed in their Christian footsteps, and shown love and acceptance to LGBTI people everywhere, for, in the words of Edmund Burke: “All that is necessary for the triumph of evil is that good men do nothing.” 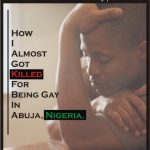