Three Russian LGBT rights groups won at least a moral victory in the European Court of Human Rights on July 16, even if it’s unclear whether Russia will abide by the court’s order to pay the organizations 42,500 euros (about U.S. $47,872) in damages for refusing them official recognition.

The ruling came amid a typically complex series of gay-rights-related events in Russia — many of them, but not all of them, putting the nation’s homophobia on display.

Europe’s rights court on Tuesday ruled against Russia over its refusal to register three associations, saying it was “unacceptable” to do so simply because they were defending LGBT rights.

But one individual applicant’s complaint was rejected because of a campaign of insults and threats against the court in response to a previous ruling.

Three associations, which promote lesbian, gay, bisexual and transgender rights, had taken Russia to the European Court of Human Rights after exhausting their legal options at home.

Between 2006 and 2011, Rainbow House, the Movement for Marriage Equality and Sochi Pride House all tried to register as associations with the Russian authorities.

One application was turned down on the grounds that the group would “destroy the moral values of society”, lead to a decrease in the population, and violate the rights of Russians who find any display of same-sex relations offensive.

Another was refused over various technical irregularities before being rejected on grounds of “extremism”.

The Movement for Marriage Equality was turned down on the grounds that its aim — same-sex marriage — was incompatible with “established morality”.

“The decisive ground for refusing to register the applicant organisations had been because they promoted LGBT rights,” the ECHR said.

“That ground could not be reasonably or objectively justified and had, moreover, amounted to discrimination on the grounds of sexual orientation.” …

Crimea: Lesbian kiss in a play

A play in Crimea has created a stir on Russian social media after a video clip emerged of a scene which featured women kissing.

The production was staged by the Gogol School theatre lab during the Tavrida Festival, an annual art event organised by Russian state youth agency Rosmolodyozh.

Reaction has been mixed, with some praising the audacity of the director, Ilya Romashko, and others calling it pure provocation.

Given Russia’s 2013 law banning the spread of “gay propaganda” among under-18s, the festival’s organisers have since issued an apology. …

Many people spoke out in defense of the play’s director, including Pyotr Verzilov, an activist with the Russian protest group Pussy Riot, popular blogger Ilya Varmalov, and Kristina Potupchik, a former spokeswoman for the Federal Agency for Youth Affairs, who said that no children attended the play, so the “gay propaganda” law was not violated.

Despite the gay propaganda legislation, there have been signs that the situation could be gradually changing in Russia.

Recently, a few people in Yekaterinburg have been fined 5,000 rubles ($80, £63) for posting homophobic comments on social network VKontakte.

According to the local LGBT resource centre, it was the first time a fine like this had been imposed in the region.

Singer Elton John protested against Russian censorship of scenes involving drug use and gay sex in ‘Rocketman,” the hit movie about his life. He also accused Putin of being deceptive when Putin criticized the West for allegedly emphasizing LGBT culture over “traditional family values.”

“I deeply respect him. He is a musical genius and we all love his performance, but I believe he’s mistaken.” …

The Russian president said his country’s ban on what he called LGBT “propaganda” was aimed at protecting children from aggressive proselytising by the LGBT community.

“Let a person grow up first before making a choice,” Mr Putin said. “Let the children in peace.”

He claimed: “Our attitude to the LGBT community is absolutely calm and unbiased.”…

Russia continues to adopt a hands-off attitude to news about repression and torture of LGBT people in the semi-autonomous Russian republic of Chechnya.

In the most recent news from the region, a Chechen man who escaped told NBC News about being tortured because of his sexual orientation:

““While police officers repeatedly asked me to betray other LGBTQ community members, I was beaten — for hours. They were using a plastic pipe.”

“I was telling them that I don’t know what they’re talking about, but they said that they know who I am,” he added. “Then they started torturing me with electricity.’ “ 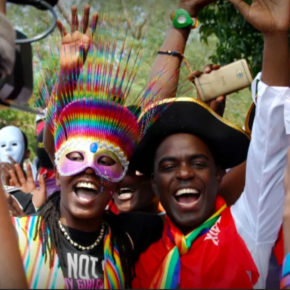