As a Kenyan high court heads toward a decision on whether to overturn the country’s two anti-LGBT laws, homophobic Kenyans are worried.

The case was brought by Kenya’s National Gay and Lesbian Human Rights Commission (NGLHRC), a Nairobi-based LGBTI rights advocacy group that seeks to overturn the Kenyan Penal Code’s Sections 162 and 165.

Section 162 provides for up to 14 years in prison for sexual intimacy between men (“carnal knowledge of any person against the order of nature”).

Section 165 provides for up to five years in prison for “gross indecency with another male person.”

The first court hearing on the case was last month. The next one is scheduled for Feb. 22.

Eric Gitari, a lawyer and executive director of the NGLHRC, told the court that both sections are discriminatory and violate constitution provisions, including the right to equality, freedom from discrimination, human dignity, freedom and security of the person and right to privacy.

Anti-LGBT advocates have been arguing loudly in favor of the two anti-gay laws.

CitizenGo Africa said that “judicial activism on matters LGBT is the worst mistake being committed on Kenyan soil at the moment.”  The group called for a referendum on the issue, confident that most Kenyans oppose homosexuality.

Although the court case is locally originated, Abu Ayman Abusufian, the spokesman for a Nairobi mosque, blamed it on foreign gay-rights advocates.

“Kenyans should join hands to resist the blind importation of practices that threaten to pollute religious and cultural values that they hold dear to their hearts,” he wrote in Kenya’s Daily Nation.

Gay Star News reported that Kenyan activists say that at the High Court’s three-judge panel “the case could go either way, as one judge is in favour of decriminalisation, one isn’t, and the other is undecided.”

However, Gay Star News noted “some instances of anti-LGBTQ stances being taken by officials, with Disney Channel show Andi Mack being banned in the country for featuring a gay character, and an official saying that two lions caught having gay sex should be sent for counselling.” 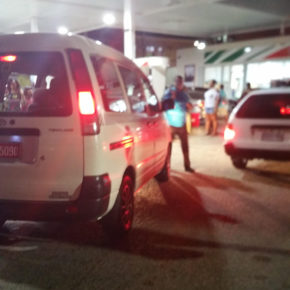