More good news for LGBTQ rights could be on the way in the Caribbean, following the summer’s two legal victories that overturned anti-gay laws — in July in Antigua and Barbuda, in August in Saint Kitts and Nevis. Next up are court cases affecting Barbados, Dominica, Grenada, Jamaica, Saint Lucia, and Saint Vincent and the Grenadines.

Below is a recap of the current state of the fight for LGBTQ rights in the Caribbean, largely based on the Xtra magazine article “New legal victories give hope to Caribbean queer people whose sex lives remain criminalized” by journalist Rob Salerno, who also is an editor for Erasing 76 Crimes.

His article describes “a coordinated legal struggle that is reshaping the English-speaking Caribbean, a region that has sometimes been considered one of the more dangerous places for LGBTQ+ people. …

“The Eastern Caribbean Alliance for Diversity and Equality (ECADE), an umbrella organization of LGBTQ+ groups across the small islands of the region, has taken the lead in the fight with assistance from the Canadian HIV Legal Network. Buoyed by court decisions that struck down sodomy laws in Belize in 2016, and in Trinidad and Tobago in 2018, ECADE began working with local organizations to file court challenges across the region in 2019.

“ECADE, which participated in the Antigua and Barbuda and in the Saint Kitts and Nevis cases, is working with local organizations on three other court challenges, those pending in Barbados, Grenada and Saint Lucia. The case in Grenada is expected to be heard later this year, while the other two outstanding cases have already been heard and are awaiting rulings.”

Here are country-by-country summaries and excerpts from Salerno’s article:

Of former British colonies in the Caribbean, only the Bahamas passed legislation to decriminalize sodomy, in 1991. (The United Kingdom decriminalized sodomy in England and Wales in 1967, and in the rest of the U.K. by 1982.)

The Supreme Count in August 2016 overturned that nation’s anti-sodomy law as applied to consensual sex.

In Trinidad, the High Court overturned the country’s anti-sodomy law in 2018.

The Eastern Caribbean Supreme Court ruled on July 5 that the country’s buggery and what’s defined as “serious indecency” laws were unconstitutional and void, with immediate effect. The case had been filed by ECADE and the local group Women Against Rape.The government did not defend the law and has not announced plans to appeal.

The Eastern Caribbean Supreme Court ruled on Aug. 29, that the country’s sodomy laws violated the constitution’s provisions for the right to privacy and freedom of expression and were “null and void and of no force and effect to the extent that it criminalizes any acts constituting consensual sexual conduct in private between adults.” The case had been brought by citizen Jamal Jeffers with the Saint Kitts and Nevis Alliance for Equality with the help of ECADE.

Two separate cases are winding through international bodies seeking to have the country’s sodomy law struck down.

The first, filed by trans activist Alexa Hoffmann, was filed at the Inter-American Commission on Human Rights, the arm of the Organization of American States that can hear complaints, investigate them and lean on states to remedy situations. Hoffmann filed her complaint there, arguing that Barbados was in violation of the American Convention on Human Rights. The commission has previously ruled that sodomy laws violate the convention in [Jamaican-Canadian activist] Maurice Tomlinson’s case against Jamaica. While the commission can’t typically compel a government to act, Barbados is unique among Caribbean countries in that it accepts the compulsory jurisdiction of the Inter-American Court of Human Rights, which is based in Costa Rica. Hoffmann’s complaint to the commission is the first step in bringing a case to that court.

However, Barbados accepts the Caribbean Court of Justice as its final court, and in 2018, that court ruled that “savings clauses” [which keep former colonial laws intact after independence] are no longer in effect for its member states, a point which was the foundation of Hoffmann’s complaint. Barbados has been trying to quash Hoffmann’s complaint, arguing that it should therefore be heard in domestic courts, since the law is newly available to be challenged. Hoffmann has declined to withdraw her complaint.

Meanwhile, with the opening presented by the CCJ “savings clause” decision, ECADE filed its own challenge in Barbados’ domestic courts, which was heard earlier this year. A decision is expected sometime in the next several months.

Minority Rights Dominica is spearheading the court challenge against the island’s sodomy law, which is expected to be heard at the Eastern Caribbean Supreme Court in September 2022. Dominica has no “savings clause” in its constitution, and any final appeal would be heard at the Caribbean Court of Justice. Prime Minister Roosevelt Skerrit, in power since 2004, has vowed in the past to defend the buggery law, even as he has claimed that it is not being enforced.

ECADE is spearheading the challenge to Grenada’s law, which is expected to be heard at the Eastern Caribbean Supreme Court later this year. Grenada’s constitution does not include a “savings clause” that would insulate the sodomy law from challenge. Any appeal would be heard at the Privy Council in London, U.K..

The only country with a sodomy law in the continent of South America, no court challenge to the sodomy law has been filed at this time in Guyana. However, LGBTQ+ activists there scored a major win for the whole region when they brought a case against a law banning crossdressing to the Caribbean Court of Justice. Not only did that decision strike down a law that was used to harass trans people, but that was the case that led the CCJ to rule that “savings clauses” were no longer in effect. That paved the way for challenges to laws in Barbados and Dominica, the other countries that accept the jurisdiction of the CCJ.

Guyana’s parliament formally repealed the crossdressing law in 2021, but did not address the sodomy law.

Lots of legal intricacies here. Maurice Tomlinson’s fight against Jamaica’s sodomy law goes all the way back to 2012, when he filed a challenge at the Inter-American Commission on Human Rights. The commission eventually ruled in late 2020 that the sodomy laws contravene the American Convention on Human Rights, but so far has not persuaded the Jamaican government to act.

Jamaica’s Bill of Rights contains a “savings clause” that specifically protects laws regarding sex offenses, including sodomy, that predate the nation’s Bill of Rights. But Tomlinson filed a case with the Jamaican Supreme Court in 2015 arguing that the savings clause no longer applies because the government amended the sodomy law to stiffen its penalties in 2012, effectively making it a new law. The Jamaican government has managed to stall with procedural tactics to this day.

Tomlinson won an initial victory in January 2022, when the court denied the government’s move to have the case thrown out due to the savings clause. The court agreed with Tomlinson that the issue of whether or not the law is “saved” ought to be decided by the same judge who ultimately decides if the law is unconstitutional. The government has filed an appeal of that January ruling that will be heard next year.

Only once that question of whether the law is saved is resolved—and only if it’s resolved in Tomlinson’s favor—will the court deal with the substance of the sodomy law.

Given how tenacious the government has been in protecting these anti-gay laws, any decision is likely to be appealed to the Privy Council in London, U.K. Unlike the Caribbean Court of Justice, the Privy Council has ruled on a narrow question that “savings clauses” are still in effect in the former colonies that have them, as long as the law hasn’t been amended. However, the Jamaican government argues that the law hasn’t been substantially amended, only administrative procedures around it have changed, and therefore it is still “saved”.

A court case was brought by ECADE and local partners earlier this year at the Eastern Caribbean Supreme Court; a decision is expected in coming months. There is no “savings clause” in its constitution. Any appeal would go to the Privy Council in London, U.K.

SAINT VINCENT AND THE GRENADINES

A court case was launched in 2019 by two queer Vincentian citizens, Javin Johnson, who claimed asylum in the U.K. in 2017 and lives there, and Sean Macleish, who currently resides in the United States. After years of delays due to technical questions, the substantive case is expected to be heard near the end of this year at the Eastern Caribbean Supreme Court. There is no “savings clause” in the constitution and any appeal would be heard at the Privy Council in London, U.K.

Xtra magazine article “New legal victories give hope to Caribbean queer people whose sex lives remain criminalized” describes Caribbean LGBTQ activists’ varied legal strategies, including whether to focus on same-sex marriage and how much to publicize their court cases. It also summarizes some of the complexities of international courts’ jurisdiction in the region.

The Jamaica section of this article was revised on Sept. 24, 2022, to clarify that the Privy Council has ruled that old British colonial laws that were adjusted post-independence are no longer “saved” and therefore are no longer valid. 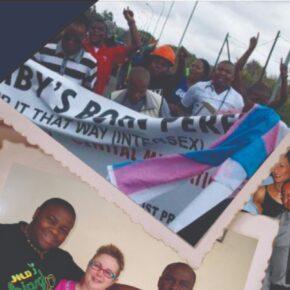