Lust and love. Cougars, boy toys, stag and hen parties. Christians, Muslim, Hindus, Jews, atheists and agnostics.  They’re all part of this discussion of the reasons for approving marriages between two men or two women in Barbados.

This is the second of two commentaries about the realities and prospects for same-sex relationships, marriages and civil unions in Barbados. The first was “Barbados commentary: Same-sex marriage protesters should go home”, published Oct. 20.

Few LGBTI rights advocates, even in Barbados, think that the subject of marriage equality is a priority – in fact, they have gone on record in local newspapers as saying that there are bigger fish to fry.

Many believe that, once they seek laws and policies which acknowledge gender identity, decriminalise acts of intimacy between individuals of the same sex and prevent discrimination on the streets, in a rental property or a place of employment, their work is done.

However, marriage and relationship equality also fall squarely into the court of human rights defenders.

The core of the principle is the right not to be discriminated against on the basis of any differentiating characteristic, up to and including sexual orientation and gender identity.

To lay bare how non-discrimination works, let us say a woman applied for a marriage license in order that she could be married a second time. She was previously married to a man, but after several years that marriage ended, either by divorce or his death. On the marriage license application, she has stated that she wishes to be married to a woman this time, as she is bisexual. She is the same person who applied for a marriage license the last time. She just wishes to build and share a life with another woman instead of with a second husband. What basis would the State have to deny her that privilege? Why should the State opt to qualify or disqualify a person from entering into a contract solely because of a sexual characteristic, when apart from that, they are an otherwise viable candidate to enter into a contract of marriage?

For the State to engage in this practice is precisely the definition of discrimination, which our constitution, and many human rights treaties, in fact forbids the State to indulge in.

Another way to view human rights is to consider our very pluralistic society. Barbados is said to be a “Christian nation,” due to the fact that the citizenry is predominantly Christian. However, some areas close to Bridgetown have mosques and Muslim men and boys can be seen wearing the traditional attire of the religion’s culture. Some stores in Bridgetown are run by Hindu people, and the area around the cash register may even feature paintings or sculptures dedicated to the deity which that shopkeeper worships. The Nidhe Israel Synagogue is in the heart of Bridgetown. I even know of at least one Buddhist person, and as I stated earlier, I myself am an atheist, and have met many other atheist and agnostic people in Barbados, with whom I occasionally meet in person to have a get-together.

No law prohibits Muslim children from going to schools attended by mostly Christian students. Muslim students are even welcome to excuse themselves from assembly periods, where Christian prayers and hymns would be sung. Hindu and Muslim businesses can open their doors widely on every main road and side street in Bridgetown. Jewish people are allowed to go to a Synagogue in the heart of the capital in order to worship or grieve a loved one in their own cemetery, separate from the Christian cemeteries.

No religion is allowed to dictate the lives of the general public. But many Evangelical Christians would insist that the Government should engage in the practice of discriminating against LGBTI people as they apply for marriage licenses.

If each individual seeking to join in marriage is capable of making his or her own decision and is prepared to start making decisions jointly or even on each other’s behalf, neither the Church nor the State should try to prevent that from happening.

Marriages are intended for the purpose of creating families, they say, but they don’t object to heterosexual couples marrying if one partner is past child-bearing age, or is sterile, or if the couple is using contraception.

Same-sex marriages and civil unions merely would be based on lust rather than love, they say, but they accept that lust as well as love is at play in heterosexual marriages.

After all, we have situations where a man in his 60s takes up with a woman in her 20s, sometimes making jokes about how she will “kill” him in bed, and we make jokes about the “cougar” woman of nearly 50 who married her “boy toy” who’s barely 25, and joke that she needs some “lively action” in bed with something “strong.” Even when the couple are “properly” matched by age, anticipatory jokes are made about how the man will “conquer” his new wife in bed, or how she will “give him her best moves” on the wedding night.

We even entertain the customs of bachelor or “stag” parties where the groom’s male friends give him “a night for the road” complete with alcohol, coarse jokes, gag gifts and even a female stripper or other sex worker for his final enjoyment before he gets married, and bridal showers or “hen parties” where the bride’s girlfriends feature similar affectations for her as a heterosexual woman who enjoys the male form and everything to do with it sexually. Judging from those customs and the jokes we make, it’s obvious that lust is celebrated, and not just before marriage. Marriage counsellors, trusted friends, even social media have taken on efforts to try to convince spouses to remain in the marriage by “spicing things up.” Novelty toys and furniture, “getting kinky,” erotic literature and art (including pornography), even themes in television dramas and commercial advertisements speak to the element of lust that clearly can make or break any relationship, including a marriage or civil union.

So the Evangelicals lose their argument about same-sex lust as a reason to favor only heterosexual marriages, because the bottom line is – sex and physical attributes will play a major role in most romantic relationships, and that includes marriages. Very few people will say they gave their current lover or spouse that second glance simply because they had a good personality, otherwise the whopping majority of the world would be married to their “plain-looking” friend who tells good jokes and always has their back.

No matter which way you put it, the ability of two people in a committed relationship to take on the milestone of a lifelong partnership and officiate it under the seal of the government should not be qualified or disqualified simply on the grounds that one couple is of the same gender and the other isn’t.

Under the surface, the underpinnings of each relationship remain the same.

Barbadian trans advocate Alexa D. V. Hoffmann is the founding director of Trans Advocacy & Agitation Barbados (TAAB), chairwoman of the United Caribbean Trans Network (UCTRANS) and a member of the Latin American and Caribbean Network of Trans Persons (RedLacTrans). In 2018, she and two other Barbadian activists launched a legal challenge against the nation’s anti-sodomy law. 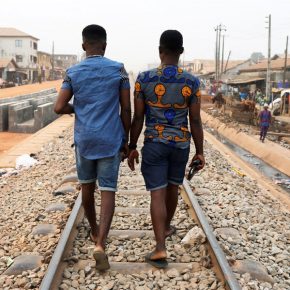