Twenty homeless Ugandan youths have sued a Kitalya Prison official and a Ugandan town council chairman who pushed for their arrest March 29 at an LGBT homeless shelter, allegedly in violation of Covid-19 lockdown rules. They were held for 50 days without a chance to apply for bail. 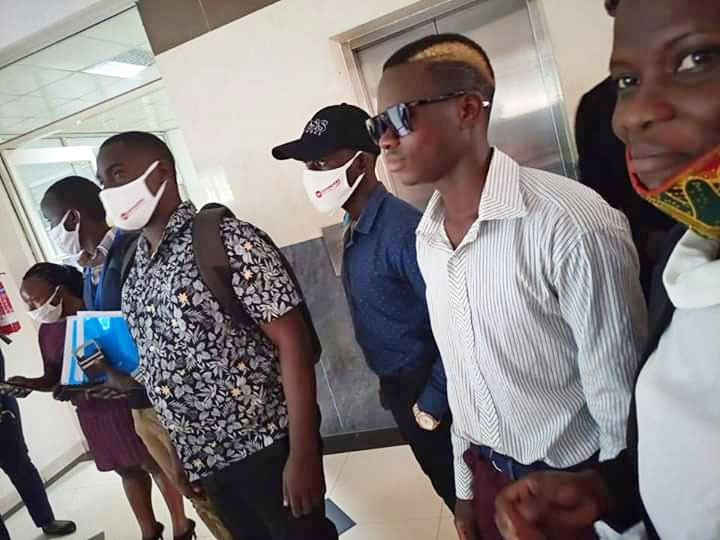 Human rights activists gather at Ugandan High Court in Kampala for filing of lawsuit accusing officials of torture. (Photo courtesy of Children of the Sun Foundation via Facebook)

They accused Philimon Woniala, the deputy officer in charge of Kitalya Mini-Maxi Prison, of torture.

They accused Hajji Abdul Kiyimba, chairman of Kyengera Town Council,
of beating them and arranging for them to be roped together and marched to the local police station while crowds gathered and threatened them. 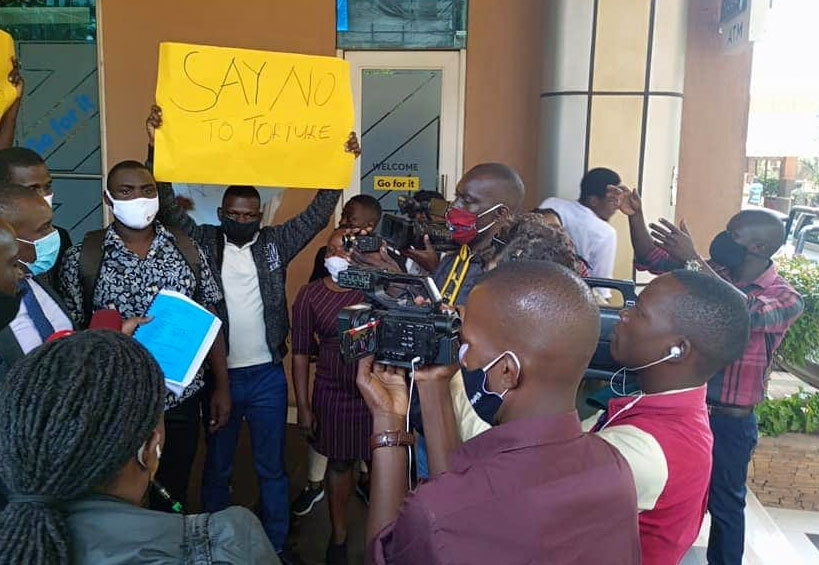 “Say No Torture” was one activist’s message during the press conference after today’s filing of lawsuit accusing Ugandan officials of torture. (Photo courtesy of Children of the Sun Foundation via Facebook)

The youths, supported by the LGBTQ-friendly Human Rights Awareness and Promotion Forum (HRAPF), filed suit today in the High Court in Kampala against the two men.

HRAPF issued this statement about the lawsuit:

20 homeless youths file suit against LC III chairman, Kyengera Town Council and the Deputy Officer in Charge of Kitalya Prison for acts of torture at their arrest and detention during the time of the COVID-19 lockdown.

Today, 20 homeless youths supported by Human Rights Awareness and Promotion Forum (HRAPF) have filed a suit before the High Court, Civil Division, seeking redress against the actions of torture, inhuman and degrading treatment, discrimination and violation of privacy, perpetrated against them by Hajji Abdul Kiyimba, the LC III chairman of Kyengera Town Council, during their arrest in Kyengera, and Principal Officer Philimon Woniala, the Deputy Officer in Charge of Kitalya Mini-Maxi Prison, while they were on remand.

The 20 were part of a group of 23 youths arrested from a residence where they were temporarily staying in Nkokonjeru ‘A’ Village in Kyengera Town Council on the 29th of March 2020, during an operation that was spearheaded by Hajji Abdul Kiyimba. The youths were accused of flouting the Presidential ban on public gatherings because they were many of them in one house, and that residents considered them to be homosexuals since they were all male and were staying in the same house. During their arrest, they were physically beaten by Hajj Kiyimba, and subjected to insults, as well as searches without a warrant. The 23 were all tied together with ropes bought by Hajji Kiyimba and marched off to Nkokonjeru Police Post amidst threats of violence from the crowd that had gathered around.

‘Hajji Kiyimba repeatedly beat me with a cane that he got from one of the Local Defence Unit (LDU) members. He hit me on the arms, and back and I still have scars from those beatings’ said Mukiibi Henry, the First Applicant in the case.

Twenty of them were eventually charged with ‘doing a negligent act likely to spread infection of disease,’ contrary to Section 171 of the Penal Code Act, before the Chief Magistrates Court of Mpigi at Nsangi. They were then remanded to Kitalya Mini-Maxi Prison, where they were held for over 50 days, during which period they endured a myriad of forms of violence, ranging from taunting, flogging, scalding, subjection to corporal punishment, as well as denial of access to food, sanitary facilities and medication. In one particularly extreme incident, the Deputy Officer in Charge of Kitalya Mini Maxi Prison, Principal Officer, Philimon Woniala personally asked one of the 20 to strip naked, and then burnt him with a burning piece of wood between the thighs.

During the first 42 days of detention, lawyers from Human Rights Awareness and Promotion Forum (HRAPF) were denied access to the 20, until the High Court issued an order directing that the lawyers should be given access to their clients as not doing so constituted a violation of the non-derogable right to fair hearing and the right to liberty of the 20.

Shortly, thereafter, the Director of Public Prosecutions (DPP) withdrew charges against the 20, and they were thus released. This indicated that there was indeed no justification for their arrest in the first place.

This case brings to the forefront the issue of the COVID-19 restrictions being used disproportionately against the poor and most vulnerable sections of society. The 20 were homeless youths who had nowhere else to go after the President had ordered everyone to stay at home. They were following, rather than flouting the Presidential directives. Their arrest was thus wrong and unlawful.

‘The fact that they were remanded to prison at the height of the COVID-19 crisis exposed them further to COVID-19 and exacerbated the already congested conditions in prison. Prisons need to be decongested rather than further congested at a time like this’ said Dr. Adrian Jjuuko, the Executive Director of Human Rights Awareness and Promotion Forum (HRAPF)

The case also highlights the problem of torture that the country has grappled with for long. Whereas Uganda ratified the United Nations Convention Against Torture, and has enacted the Prevention and Prohibition of Torture Act 2012 that is dedicated to promoting respect for human dignity and preventing any form of torture, cruel, inhuman and degrading treatment, there is still a huge gap in terms of enforcement of the law. According to the Uganda Human Rights Commission, in its 2018 report, cases of torture rose by 13% in 2018.

‘The prohibition against torture is absolute, and non-derogable. As such, regardless of the status of the person on remand, prison authorities, just like other law enforcement agencies, should not violate this most sacrosanct of rights.’ said Susan Baluka, HRAPF’s Advocacy and Strategic Litigation Officer.