British Prime Minister Theresa May has publicly expressed “deep regret” for Britain’s role in criminalizing same-sex relations in its former colonies. About half of the world’s remaining laws against gay sex were originally imposed by the British in their colonies.

In contrast to poorly received comments in 2012 by then Prime Minister David Cameron that the U.K. would cut foreign aid to countries that violate human rights of LGBT people, May said, “The UK stands ready to support any Commonwealth nation wanting to reform outdated legislation that makes such discrimination possible.”

Leaders of former British colonies are in London this week for Commonwealth meetings on many pressing issues, but little to do with LGBT rights despite public pressure to tackle the subject.

The BBC reported today on May’s comment, which came as the Commonwealth Heads of Government conference got under way. That article is reprinted here with two annotations:

British Prime Minister Theresa May has said she deeply regrets the UK’s role in criminalising same-sex relations in its former colonies.

The laws were passed under British rule and are still used in 37 of the Commonwealth’s 53 member nations. [Editor’s note: Taking account for last week’s court ruling in Trinidad, the total is 36.]

There is a global trend towards decriminalising homosexual acts, but some countries, like Nigeria and Uganda, have imposed stricter laws.

At a Commonwealth meeting, Mrs May said laws were “wrong then and wrong now”.

“Nobody should face discrimination and persecution because of who they are or who they love,” Mrs May said in London as Commonwealth leaders gather for their summit, which is held every two years.

“The UK stands ready to support any Commonwealth nation wanting to reform outdated legislation that makes such discrimination possible.

“Across the world discriminatory laws made many years ago continue to affect the lives of many people, criminalising same-sex relations and failing to protect women and girls.”

The number of states that criminalise same-sex relations is decreasing annually, with Belize and the Seychelles repealing such laws in 2016. [Editor’s note: Trinidad effectively did so last week, pending an appeal. The tiny Pacific island nation of Nauru also repealed its anti-gay law in 2016. Mozambique, with a population of 24 million, did so in 2015.]

But in many socially conservative and religious countries in Africa, where homosexuality is a taboo, there has been resistance to calls to decriminalise same-sex relationships.

South Africa, which rejoined the Commonwealth after the end of white-minority rule in 1994, is one of the exceptions.

It has one of the most liberal constitutions in the world, which protects gay rights, and was the first African country to legalise same-sex marriage in 2006. 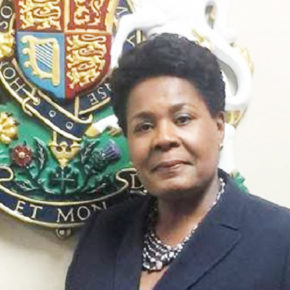