Human rights defenders in Malawi have reportedly voiced concerns over the announced Public Inquiry into LGBTI issues that the Malawi Human Rights Commission is planning to conduct in the country.

In Myanmar, a report by the Centre for Responsible Business has cast a light on discriminatory practices that exclude women, rainbow communities, people living with HIV, and religious and ethnic minorities from the workforce in Myanmar.

From Malawi, researchers found that tourist and rural areas had higher rates of HIV among gay and other men who have sex with men than in some cities that are targeted for HIV programming. Additionally, only 1% of HIV-positive men knew their status. The researchers cautioned that public health efforts were disrupted by policies that criminalize homosexuality.

The Ministry of Health in Kyrgyzstan approved a new manual that provides clinical protocols and guidelines for social assistance and health providers caring for transgender, transsexual, and other gender nonconforming people.


In Pakistan, a group of men broke in and raped transgender women in their home. In another incident, police said men in an “affluent” neighborhood harassed a group of trans women, murdering one. Kami Sid, a friend of the murder victim and Pakistan’s first openly trans model, told reporters: “This society may have found tolerance, but there is no acceptance for the transgender.”

An LBGTI activist from Samara, Russia, was scheduled to stand trial Sept. 18 after being charged with “propaganda of non-traditional sexual relationships among minors using Internet.” If found guilty, she could be fined up to 100,000 roubles (€1,500).

An active member of the Youth Coalition for Sexual and Reproductive Rights (YCSRR), Evdokia Romanova was summoned to a local police station in July 2017 to act as a witness for another case, only to see herself charged under the Russian “promotion” law as soon as she arrived there. As Amnesty reports, she was unlawfully denied legal representation when questioned by the police, and her lawyer could access casefile materials only six weeks after she was charged.

Evdokia Romanova’s casefile revealed that the charges most likely relate to sharing links to publications by the Youth Coalition for Sexual and Reproductive Rights, as well as articles about rainbow communities, on social media. 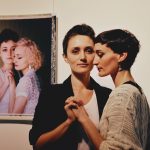