Jamaican fashion designer, video director and LGBT rights activist Dexter Pottinger, who was known as “the face of Pride,” was found stabbed to death at his home on Aug. 31.

Pottinger will always be remembered for his “significant contribution to the development of the Jamaican fashion industry. … I consider Dexter to have been an exceptional artist. His designs were works of art. Dexter styled many of our popular entertainers and helped to set the style trend in dancehall.  His music videos were also epic. We have lost a really talented Jamaican.”

Pottinger was the “Face of Pride 2016” when J-FLAG (the Jamaica Forum of Lesbians, All-Sexuals and Gays) celebrated Pride Week last year.

“Will there be justice for Dexter? I hope the murderer is caught. Far too many unsolved crimes against LGBT people in the Caribbean.”

“Always when we think we are poised to making strides forward, we are reminded of the fathomless depths of Hate. And still we shall stride. Our feelings of shared grief go out to the Jamaican LGBT community and their friends…”

“We are not safe till we all are safe. May he rest in power.”

A Jamaican gay activist dubbed “the face of Pride” has been found stabbed to death in his home, according to reports.

Dexter Pottinger, a fashion designer, was found dead on Thursday at his home in the Washington Gardens neighbourhood of Kingston.

His body was partially decomposed, according to police officers quoted by the Jamaica Gleaner.

Neighbours reported hearing screams in the early hours of Wednesday morning, the paper said, but did not tell police about the disturbance, it was said.

Mr Pottinger became the face of Pride Week in 2016 in celebrations organised by the Jamaica Forum of Lesbians, All-Sexuals and Gays (J-FLAG).

At the time he said: “I hope that my participation will show members of J-FLAG that it is okay to come out in an atmosphere where there is no violence, realise that it’s your time to be part of the change—not just for the week but permanently as a part of the community.

“It was hard for me as a youngster, but now my mother understands me more and my dad is cool, My siblings are also cool with me and my brother works with me.” 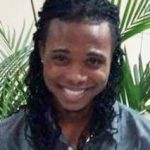