In the intensely homophobic Russian republic of Chechnya, what began as a minor drug arrest escalated into mass arrests of Chechen men suspected of being gay, torture, deaths and secret prisons described as concentration camps. Data on telephone calls to and from arrested Chechens were used to track down other suspects.

Reporter Benedict Brook tells the story in News.com Australia, with this teaser:

Where making a call could cost your life

Electrocution, extortion and death in the concentration camps that a Russian region deny exist

If a close friend had gone missing, who wouldn’t call their mobile to see if they could track them down?

But in a remote corner of Russia, that simple act of making a phone call has allegedly led to scores of men being tracked down by the authorities, imprisoned in a modern-day “concentration camp”, extorted, tortured and even killed. Yet, they haven’t even broken the law.

What started as an isolated arrest for a relatively minor offence in the southern Russian region of Chechnya is said to have now escalated to the capture of hundreds of gay men.

It’s claimed they have been electrocuted, beaten with pipes and forced to insert glass bottles into their anuses.

However, on [April 16], Chechen President Ramzan Kadyrov said the claims, which first surfaced last week, were a “massive information attack, … reality is distorted, attempts are being made to blacken our society, lifestyle, traditions and customs.”

Last week, his spokesman claimed there were no gay men in Chechnya to imprison. AP has now reported the regional leader as saying human rights had undergone a “grandiose” improvement.

But the publication that broke the story, Novaya Gazeta, has said it fears for its journalists’ safety following a resolution from senior Muslim clerics in Chechnya which stated “retribution will catch up with the true instigators, wherever and whoever they are.”

The journalist who broke the story has gone into hiding but the Kremlin has said there is “no reliable information” to corroborate the claims of imprisonment, torture and deaths.

Novaya Gazeta says, in a translation from the original Russian article, the region has been heading down this route for some time. “Mass repression in Chechnya has become a bad tradition. Each time, this repression becomes more catastrophic in scale and increasingly absurd in its reasoning”.

While not illegal in Russia, homosexuality is frowned up. However, nowhere is it more dangerous than in deeply religious Chechnya where families have been known to commit “honour killings” of gay relatives.

That underground purge burst into the mainstream in February when Chechen police arrested a man under the influence of drugs. Police decided rifled through the man’s phone.

“In studying the phone, sexually explicit photos and videos were found and dozens of contacts of local homosexuals. It is this database that provoked the first wave of arrests and executions,” the publication reported.

From homes and workplaces, police began rounding up the men who were unlucky enough to have their details stored in the phone.

A caller to the Russian LGBT (lesbian, gay, bisexual and transgender) Network helpline said a friend was arrested on suspicion of being gay due to his profile on VKontakte, the Russian rival to Facebook.

“Late in the evening, a black Toyota Camry without license plates approached his house. The young man was put in the car and driven away in an unknown direction, no one telling the family why he was being detained.”

The man was released only when his family discovered the secret camp his was being kept in and after he was publicly shamed on TV.

That secret prison, the so-called “concentration camp” is just off the main highway in the town of Argun, around an hour east of Chechnya’s capital Grozny.

“It looks abandoned, but it isn’t. It’s more like a closed prison, whose existence is not officially noted,” said a witness interviewed by Novaya Gazeta.

“Several times a day we were taken and beaten. The main task was to find out your network of contacts.

“They think if you were taken then all your circle of contacts must be gays,” said the witness.

“That is why our phones are not switched off. They are waiting for someone to text or call.

“Any man who during this time calls or texts is called back and invited to a meeting under any pretext.”

When the men arrive at the meeting point, they too would be taken, accused of being gay.

The punishment for those accused of transgressing Chechnya’s strict moral code was harsh.

“The detainees were tortured, put on the bottle, some were beaten to death and returned like a bag of bones,” said one.

“They beat us with polypropylene pipes, always below just below the waist, thighs, buttocks and lower back. They said we were ‘dogs that didn’t have a right to life’.”

A victim claimed his hands were attached to wires from an electric stun gun.

“When a current is generated and the body starts to shake, you stop to think and begin to cry. It hurts. I endured as I could, and then lost consciousness and fell,” he said.

“Some were beaten with special predilection. There was a man who was absolutely broken, he was beaten so that the body had open wounds.

“He was sent to relatives, but after some time it became known that he was buried.”

There were only three ways out of the camps, witnesses said. If relatives bought off the authorities, if those captive revealed their friends names or if they committed to forever leave Chechnya. That and death which the Russian LGBT Network told the BBC there had been at least three.

The organisation suspects there have been many more fatalities in the round-up.

Protests have been held outside Russian embassies worldwide, including in London. But the international community has been accused of being slow to react.

Last week [Australian] Foreign Minister Julie Bishop said Australia was “concerned at reports of mass arrests of individuals in … Chechnya in the Russian Federation due to their perceived or actual sexual orientation.”

On Saturday, Canada chimed in calling on Russia “to immediately ensure the safety of all persons in Chechnya”.

The Chechen authorities have said the claims are “lies” and the region’s spiritual leader, Mufti Salah-hajji Mezhiev, was quoted on the BBC as saying, “Allah will punish those who slandered the whole Chechen nation.”

While the Kremlin has insisted journalists should be protected from attack, it is also loath to meddle too directly in the affairs of Chechnya.

The restless republic has erupted into civil war several times over the last few decades with the current president staunchly pro-Putin.

Moscow’s lack of action has infuriated human rights activities and journalists at Novaya Gazeta itself.

In a statement, the paper said, “Silence, and a lack of action by those who have the capacity to do something, mark them as accomplices.”

Meanwhile, men across Chechnya are scared to make calls to their missing friends, fearful they will be the next to be sent to the camp. 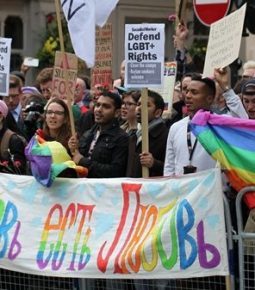