Russian courts have become increasingly aggressive in pushing an anti-gay agenda. The latest victims of judicial homophobia are Instagram, Tik-Tok and the Russian LGBT Network.

A court in Moscow ruled Tuesday, April 26, that Instagram and Tik-Tok had violated Russia’s “Anti-Gay Propaganda Law” law that bars discussion of sexual minorities in the presence of minors.

And last week a court in St. Petersburg ordered the liquidation of the Sphere foundation, the parent organization of the Russian LGBT Network. The foundation plans to appeal the ruling.

MOSCOW, Russia – The Tagansky Court of Moscow ruled Tuesday that social media platforms Instagram and Tik-Tok were guilty of violating the Russian Federation’s law that bans discussions or information regarding LGBTQ+ people or community known as the ‘Gay Propaganda Law.’

In the case against Tik-Tok, Judge Timur Vakhrameev found TikTok guilty under Part 2 of Art. 13.41 of the Code of Administrative Offenses of the Russian Federation (“Non-deletion by the site owner of information if the obligation to delete is provided for by the legislation of the Russian Federation”) for violating the tenets of the Gay Propaganda law requiring deletion of the offending materials.

In another case the court found that Meta, parent company of Instagram, had also violated “Part 2 of Article 13.41,” and imposed a fine of 4 million rubles, which is roughly equivalent to $54,000 U.S. dollars, for not deleting materials on Instagram promoting “non-traditional sexual values to minors”

Since the start of the war with Ukraine, the Russian government’s Federal Service for Supervision of Communications, Information Technology and Mass Media, abbreviated as Roskomnadzor has blocked Facebook, Instagram, and Tik-Tok from operating in the Russian Federation.

Regarding the Russian LGBT Network, the Los Angeles Blade reported:

On Thursday, April 21, Judge Tatiana Kuzovkina ruled in favour of the Justice Ministry’s argument that the activities of Sphere ran contrary to the Russian state policy designed to preserve, expand and develop [the country’s] human capital.”

The ministry also accused Sphere of spreading “LGBT views” and working with people under the age of 18, aspiring, among other things, to “change Russian federal legislation regarding the LGBT movement” – in other words, the country’s infamous discriminatory “gay propaganda” law. …

“It should be clear that the ministry and the court made this decision not on legal, but on ideological basis. No Russian law prohibits the activity of organizations that “do not correspond” to any values. There is simply no such basis in the law for the liquidation of NGOs. In this sense, the decision of the court is iconic – mandatory state ideology has returned. It is now official. …

“The work continues. Their hands are dirty but too short to ban us.”

Tanya Lokshina, the Associate Director, Europe and Central Asia Division for Human Rights Watch wrote at the time of the lawsuit being filed;

“With Sphere, the authorities have explicitly disclosed their political and anti-rights motivation from the starting block. After years of hindering the work of LGBT rights activists with the use of the “foreign agent” and “gay propaganda” laws, the authorities now demand the organization be shut down in the name of “traditional values.” The courts should not be compliant with this act of political, homophobic censorship that blatantly violate Russia’s human rights obligations.”

A Russian court has effectively shut down the country’s largest LGBTQ rights organization after a failed attempt by the government to liquidate the Russian LGBT Network and its parent organization, the Charitable Sphere Foundation, in February.

A court in St. Petersburg issued the decision Thursday [April 21] in support of Russia’s Justice Ministry. A representative of the ministry had claimed the Charitable Sphere Foundation illegally “carried out political activities using foreign property” under the guise of a charity and said its activities are aimed at changing legislation, including the Russian Constitution. In its lawsuit, the Russian government also accused the group of spreading “LGBT views” and engaging in activities that go against “traditional values.” 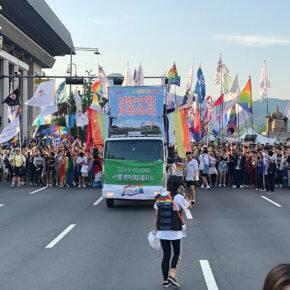