Hopeful signs for LGBTI equality appeared throughout 2016, though the year was marred by setbacks, ongoing arrests and anti-gay violence.

In addition to a continuing slow trend toward repeal of anti-gay laws, 2016 saw the following positive developments.

This article is the third of three recaps of the events of 2016. The other two are:

The U.N. Human Rights Council voted in July to hire a specialist to monitor nations’ compliance with U.N. principles designed to protect the dignity and human rights of LGBTI people. An attempt to derail that action failed in November at the U.N. General Assembly. A separate anti-LGBTI effort succeeded in October, when a group of up to 17 countries led by Belarus blocked a plan to include the rights of gay, lesbian and transgender communities in a new urban strategy drawn up by the United Nations.

Shams, the Tunisian group pushing for the decriminalization of homosexuality, won its legal challenge against a government order that it suspend operations.

Challenge to Jamaican anti-sodomy law gets under way

Bishops in the Anglican Church of Southern Africa resolved that gay and lesbian partners who enter same-sex civil unions under South African law should be welcomed into congregations as full members of the church. That’s a sharp contrast to the stance of the Anglican churches of Nigeria, Uganda and Kenya. However, the Southern Africa church, with about 3 to 4 million members, does not yet authorize same-sex marriage ceremonies.

The State Duma Committee on Constitutional Legislation and State Building rejected a bill that would make it illegal to come out as gay in Russia.

The Archbishop of Canterbury apologized to the LGBTI community for the “hurt and pain” caused by the Anglican Church. Archbishop Justin Welby acknowledged that the church contributes to the “pain and suffering of many LGBTI people around the world.” He also met with Zimbabwe President Robert Mugabe and told him that “the criminalization of LGBTIQ people is entirely wrong.”

The remarkable work of Bombastic Magazine continued in March with the publication of its second issue. Along with its associated African LGBTI media site Kuchu Times, the Uganda-based magazine provides a place where the voice of sexual and gender minorities can be heard in a country, and continent, where they are often silenced or ignored.

Former Nigerian President Goodluck Jonathan joined the club of former African leaders talking about the need to change their country’s anti-LGBT laws. Speaking at a forum in London, he acknowledged that he “signed into law a bill that discriminates against a segment of our population. … In the light of deepening debates for all Nigerians and other citizens of the world to be treated equally and without discrimination, and with the clear knowledge that the issue of sexual orientation is still evolving, the nation may, at the appropriate time, revisit the law,” he said.

Grand Mufti Shawki Allam, a leading religious leader in Egypt, has spoken up against anti-gay violence. According to a report in Mamba Online: “Each person is equally inviolable,” Allam said. “Even if we view homosexuality as a religious sin, that does not give anyone the freedom to injure another person in any way.”

Islamic leaders in Iraq and Pakistan have issued statements calling for toleration of some LGBTI people. Each announcement fell far short of what LGBTI activists know is necessary to achieve fair and equal treatment for LGBTI people, but each represented a shift toward acceptance of at least some members of the LGBTI community.

LGBTQ magazine publishes in Arabic, not without opposition

The Jordan-based online LGBTQ magazine My.Kali has introduced an Arabic edition, which provoked a strong negative response from anti-gay conservatives in the Middle East. My.Kali describes itself on Instagram as an “online social & conceptual Arab webzine [which] covers issues of LGBTQI, sexuality, & gender, through art-therapy, photography, psychology, new media.”

In September, Pakistan’s national human rights commission spoke up for the right of transgender people to be protected from anti-trans violence. In December, officials in northwest Pakistan urged the federal government to guarantee transgender women’s right to vote.

QueerFest 2016, the 8th international LGBTI pride festival of Russia, attracted more than 1,500 people to a violence-free celebration. Its goal was to be more inclusive than in the past, giving voice to people whose problems often go unheard – LGBTI people living with HIV, LGBTI people with disabilities, trans, people with non-binary identities, intersex activism in Russia, feminism within the LGBTI movement, and the challenges that LGBTI families face raising children in Russia.

Elsewhere, successful Pride celebrations — unmarred by violence from anti-gay protesters — were held in many locations, including Ukraine and Jamaica.

Ugandan LGBTI rights activists traveled to the United States to press their court case against anti-gay Pastor Scott Lively, who is seeking to avoid being put on trial for human rights violations for his role in pushing for Uganda’s now-defunct Anti-Homosexuality Act.

Yahya Jammeh, one of the world’s most outspokenly homophobic leaders, lost December’s presidential election to property developer Adama Barrow, a political newcomer, 45.5 percent to 36.7 percent. At first, Jammeh agreed to step down. He has backtracked on that position and now is under international pressure to abide by the will of the voters. 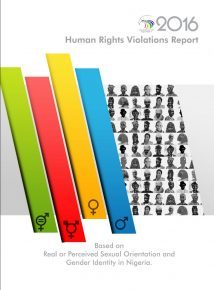