The decision to overturn that law reduces to 70 the number of nations with anti-homosexuality laws.

The Observer of Antigua and Barbuda reported.

The country’s so-called anti-buggery law – which essentially criminalises gay people – was ruled unconstitutional on Tuesday, after an openly homosexual man and the Women Against Rape group argued that it offended their constitutional rights.

Attorney Andrew O’Kola led by Senior Counsel Douglas Mendes represented the claimants in what has been coined a monumental victory for same-sex couples living in Antigua and Barbuda.

O’Kola told Observer, “This victory is a step closer to achieving an end to discrimination against persons whose sexual preferences in the privacy of their home may differ from others.

“The law is no longer seeking to police or legislate against what people do in their homes.

“Each consenting adult has a right to love and express love in the manner they choose, without the state’s intrusion.”

He continued, “This monumental decision gives those oppressed by archaic sexual offences provisions hope that they too can benefit from their fundamental rights as secured by a living constitution as interpreted by the court of law.

“Antigua and Barbuda now leads the Eastern Caribbean as having recognised the illegality of punishing a person for who they love.

“Consensual love should never be a crime,” O’Kola added.

Honourable Justice Marissa Robertson ruled that sections 12 and 15 of the Sexual Offences Act of 1995 contravene sections 3, 12, and 17 of the constitution of Antigua and Barbuda which speak to a person’s right to liberty, protection of law, freedom of expression and protection from discrimination on the basis of sex.

The ruling also stated that both sections 12 and 15 were “inconsistent with the rights of persons 16 years and older to engage in consensual sexual intercourse” in private.

In its ruling, the court ordered that the section of the Sexual Offences Act which singles out that intercourse must be between “a male person and a female person” be deleted and replaced with the word “persons” in keeping with the rights specified in the constitution.

The Eastern Caribbean Alliance for Diversity and Equality (ECADE) said it welcomes the outcome to the litigation which was launched in 2020, as part of a five-country legal challenge to what it describes as “invasive and unconstitutional remnants of colonial law”.

“ECADE recognises all lesbian, gay, bisexual, transgender, queer and intersex (LGBTQI) people in Antigua and Barbuda, whose lives, livelihoods and happiness are no longer compromised by these outdated laws,” a statement said.

Executive Director of ECADE, Kenita Placide, said, “The process of litigation is important, as it underscores how these laws contribute to the stigmatisation of LGBTQI people, how they legitimise hate speech, discrimination and violence and tear at the fabric of our society.

“Our governments have sworn to protect and uphold the rights of all and act in a manner that promotes the prosperity and well-being of all. This judgment is in keeping with this commitment.”

Alexandrina Wong, a fierce advocate and Executive Director of Women Against Rape, said, “The journey was long and challenging but we made it working together. May we continue to challenge and overcome the harmful beliefs and practices that hinder the full rights, dignity and freedom of people everywhere.

“This will open up new avenues for the people of Antigua and Barbuda to work together toward greater equality, as we are not for the first time talking about LGBTQ+ people as criminals.”

Section 15 which punishes a person for sexual indecency excludes charges against (a) a husband and his wife; or (b) a male person and a female person each of whom is 16 years of age or more. 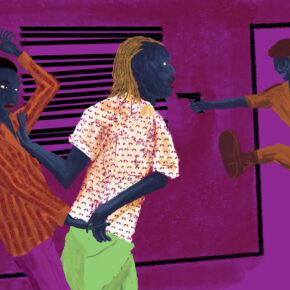