A court in Uzbekistan has convicted and sentenced an activist blogger for “libel and public insult” after he criticized a prominent Uzbek school, as well as the nation’s law against same-sex intimacy and the regime’s protections against corruption.

Miraziz Bazarov was sentenced to three years of restricted freedom after he called for same-sex relations to be decriminalized, criticized an Uzbek school that is funded by a wealthy benefactor, and stated that monitoring of international aid to Uzbekistan is too loose to protect against corruption.

In Uzbekistan, consensual intercourse between men is punishable by up to three years in prison.

Bazarov was charged last year after a beating by unidentified attackers that landed him in the hospital for a month. Police at the time blamed him for provoking the attack because he had made “insulting and inappropriate public statements that are not in correspondence with our mentality.”

When he was released from the hospital, he was put under house arrest.

Authorities said the two-day trial, which began on January 20, would be open to the press, but on the first day the judge decided that journalists, and only journalists, must present a negative PCR test for COVID-19.

“This, of course, is a biased court, and this is the fulfillment of the will of the state,” Bazarov’s lawyer, Sergei Mayorov, told the assembled journalists near the court building after the verdict was announced.

Because Bazarov had been under house arrest before his trial, he will not serve the full three years, Mayorov said, adding that the defense would not be able to see the full text of the verdict until after the weekend. It was unclear at the time of publication if Bazarov would serve time in jail or receive a more probation-like sentence.

Bazarov’s case has garnered significant international attention, in part because of Uzbekistan’s poor record with press freedom and also because of the state-sanctioned hostility to the LGBT community. Last year Human Rights Watch said gay men in Uzbekistan “face arbitrary detention, prosecution, and imprisonment as well as homophobia, threats, and extortion.” Under existing legislation, same-sex intercourse is punishable by up to three years in prison.

The case against Bazarov was launched last week after teachers at Tashkent school No. 110 filed a lawsuit against him over a video placed by the blogger on the Internet [in October 2020].

Representatives from the school’s administration were not available for immediate comment.

The school was renovated by a well-known Russian tycoon of Uzbek origin, Alisher Usmanov. Earlier in April, it was at the center of a scandal after Shahnoza Soatova, an adviser to the justice minister, said that the school administration measured the height of students’ socks as part of the “struggle against LGBT ideas.”…

Among other issues, Bazarov has also publicly urged the government to decriminalize same-sex sexual conduct, which is still legally considered a crime in Uzbekistan.

Bazarov has openly said he is not an LGBT activist, but believes that being gay is a personal issue and therefore there should be no laws against it.

Bazarov has also criticized President Shavkat Mirziyoev for insufficient anti-corruption efforts, and has questioned the efficiency of ongoing restrictions to battle the coronavirus pandemic.

Last summer, Bazarov was questioned by State Security Service investigators after he called on the International Monetary Fund and the Asian Development Bank on Facebook not to provide loans to Uzbekistan without strict control over how the funds are used.

Bazarov had told RFE/RL that he had received many online threats before the attack. He said had informed the police of this, but law enforcement did not take any action. 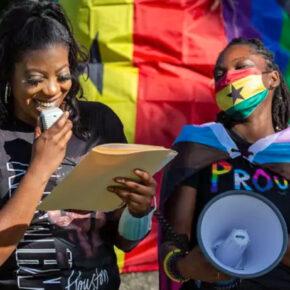