A Ugandan judge dismissed charges yesterday against 42 people who were arrested in May at an LGBTQ shelter during a police raid on what initially was thought to be a “gay wedding”.

After Kampala police realized that no “gay wedding” was being held at the Happy Family youth shelter, they charged the arrestees with violating regulations to control the spread of Covid-19. However, as months passed, the prosecution failed to produce witnesses against them in court.

Human rights activists have urged the LGBTQ community to abide by Covid-19 regulations so law enforcement officials in Uganda cannot those regulations as an excuse for making  homophobic arrests,

“The charges against the 42 out of the 44 persons who were charged with doing a negligent act likely to spread infection of a disease have been dismissed!!!

“Congratulations to our clients and we thank all our partners and allies for the support.”

The status of the remaining two arrestees was unclear.

The African Human Rights Coalition and the O-blog-dee blog reported:

The criminal case in Uganda, involving Happy Family Shelter, where 44 people were arrested, has concluded with a dismissal. While the charges were COVID-19-related, it is believed the venue was targeted and raided because the shelter was believed to be one that housed LGBTI people.

The charges against 42 out of 44 persons, who were charged with ‘doing a negligent act likely to spread infection of disease’ contrary to section 171 of the Penal Code Act, were dismissed.

The raid took place on 31st May 2021 at Happy Family Shelter was located in Nansana, Wakiso District, with allegations that a ‘gay wedding’ was taking place. The group was remanded to Kitalya Prison and finally released on bail on 4th June 2021.

The case came up for hearing [Sept. 23] at Nansana Magistrates Court.

The 42 were represented by Mr. Edward Ssemambo, of Human Rights Awareness and Promotion Forum (HRAPF). The State Attorney did not have any witnesses present and asked for an adjournment in order to find the witnesses.

Mr. Ssemambo requested a dismissal of the case for want of prosecution under section 119 of the Magistrates Courts Act since the matter has been pending since June and the prosecution had had enough time to present its witnesses. This was the second time the case was remanded for hearing.

After listening to both parties, the Magistrate then made a ruling dismissing the charges against the 42 and declared them free of the charges and discharged the sureties from their obligations. 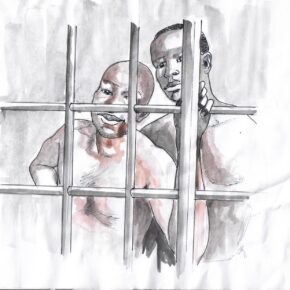