Sexual advances from a love-sick man led to 18 months in prison for Roro and Gold, a lesbian couple who had been in a close, untroubled relationship for four years.

Until then, they had a peaceful life. Roro, 22, lived with one of her aunts. Gold, 26, rented a small room in a corner of Yaoundé, the capital of Cameroon. She lived away from her family, who had rejected her because of her sexual orientation.

Gold ran a small “Call Box” firm — a common type of business in Cameroon at which customers pay to use the company’s mobile phones for calls and money transfers.  Roro was a waitress in a dance bar.

But he didn’t give up. Instead, he became a regular at the dance bar, hoping he could eventually win her heart. As he hung around at the bar, he noticed that Gold often showed up to meet Roro at closing time. Eventually he confronted Roro and insulted Gold. A fight broke out.

Scorned once again, he went to the police and denounced them as lesbians. Police arrested Roro and Gold on homosexuality charges.

Because they couldn’t pay that amount, when the 18 months was over they would need to remain in prison for an additional four months to work off the fine.

“Life in prison is hard and tense,” they told Εrasing 76 Crimes reporter Courtney Stans when she visited them at Yaoundé Central Prison last fall. “If your homosexuality becomes known to other prisoners, you are assaulted and jeered. We decided to be tolerant, discreet and to keep quiet.

“Our families are ashamed of us. They don’t want to visit us in prison because we are gay. But we have a few friends who often come to see us, when they can.

“Our wish is to serve our sentences and get out of this hell. We plan to take the desert road [north across the Sahara] when we get out of prison to leave this homophobic country and go to a European country where we can live a life without judgment despite our sexual orientation. ”

That was in November 2020. Their prospects changed this spring, thanks to hundreds of international donors and the work of Courtney Stans, Erasing 76 Crimes and the Cameroonian LGBT rights advocacy groups Defenders Without Borders (DSF) and the Cameroonian Foundation for AIDS (Camfaids).

As part of its Project Pas Seul / Not Alone 2021, Erasing 76 Crimes and its fiscal sponsor, the St. Paul’s Foundation for International Reconciliation, appealed for $7,226 in contributions to pay the fines for Roro, Gold and six other LGBT prisoners, as well as to buy food for the prisoners and pay expenses for pro-bono legal defense for three LGBT detainees who have been held at Yaoundé Central Prison awaiting trial for more than a year.  As of the publication date of this article, $6,886 has been contributed.

Donations are still needed to reach the goal, which will allow all the prisoners to be freed.

By early June, enough money had been donated to pay the fines of Roro and Gold. With the donated money, DSF made the payment on their behalf.  The happy outcome: Roro and Gold did not have to stay in prison until October to work off the fines. At 5 p.m. on June 23, they were set free.

“It was a pleasant surprise to be released today,” Gold told an attorney from DSF. “I thought I would have to stay another four months in that rotten prison.”

After walking out of prison, the couple shared a snack with the attorney and expressed their thanks to the project’s donors.

“We didn’t realize that such people still existed, who will help those they don’t even know,” Roro said. “It’s astonishing.”

Gold was a bit wary: “We hope there’s nothing shady about this,” she said.

She doesn’t need to worry. The donors who helped them are motivated by a simple desire to help unjustly imprisoned victims of homophobia, without shady motives.

Now that they are free, the couple plans to stay for a while with Gold’s grandmother in a village outside Yaoundé. Then they plan to do small-scale farming and set up a small business — perhaps a refreshment stall, perhaps a small stand selling clothes and beauty products.

U.S. tax-deductible donations to Project Not Alone 2021 are still needed. They may be made via:

The sketch that represents Roro and Gold at the top of this article was first published in Erasing 76 Crimes in May 2016 in “Artistic appeals for human rights of LGBTI Ugandans”. 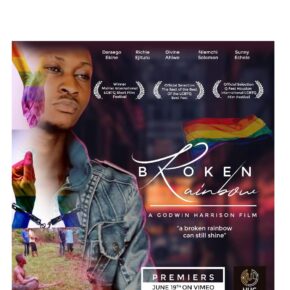