June marked the 50th anniversary of Pride, which started as a protest against state-sanctioned abuse of LGBT people. Last month also saw unprecedented global protests against anti-back racism and for me these two events highlight the significant intersectionality between being a black and gay man.

Black filmmaker Marlon Riggs once said that Black men loving Black men is THE revolutionary act. He reminisced that while going to school black and white students alike called him a “punk,” a “faggot,” and “Uncle Tom.” He felt isolated from everyone at the school: “I was caught between these two worlds where the whites hated me, and the blacks disparaged me. It was so painful.” For many black and gay persons around the world this remains the case today.

It is a historical fact that in the cradle of human civilization, Africa, homosexuality existed from time immemorial and famous rulers such as King Mwanga II of Uganda had male lovers. However, European colonizers in their self-righteous zeal to “civilize the natives” criminalized same-gender love with laws that imposed barbaric punishments.

Now 68 countries in the Global South have anti-sodomy laws, which carry draconian sentences including death for any form of non-heteronormative intimacy. These sadistic statutes continue to wreak havoc on black bodies. In 2012 I was proud to be the first Grand Marshall for Uganda Pride after which I and many others were arrested. Recently, that country has been debating a proposed revival of a hideous “Kill the Gays” bill that seeks to update the already severe colonial-era law. Even if never enacted, the bill has already served as a lightning rod for homophobic attacks as the language of many Ugandans makes no distinction between a “bill” and a “law.”

Such dreadful edicts also contribute to the vastly disproportionate rate of HIV and AIDS affecting black and brown people as they drive vulnerable individuals away from anti-HIV interventions. As a result, Africa and the Caribbean have the highest rates of HIV infections worldwide. Data published this month by Johns Hopkins University indicates that, in African countries with anti-sodomy laws, men who have sex with men (MSM) have significantly higher HIV infection rates. The same is true for the Caribbean, where the British colonially-imposed anti-sodomy law contributes to Jamaican MSM having the highest HIV prevalence rates worldwide – 33%.

A continuous export of homophobic rhetoric by representatives of extremist Christian groups from the Global North have helped to sustain and even worsen the archaic and harmful statutes. Like true neo-colonials, these hate-mongers are seeking to conquer new territories now that their homelands no longer offer sufficiently fertile soil for them to exploit. For example, American evangelical Scott Lively was instrumental in fomenting anti-LGBT panic in Uganda that led to that country’s notorious “Kill the Gays Bill”. And Canada’s Dr. Janet Epp Buckingham travelled to Jamaica and advised our Parliament strongly against constitutional protections for LGBT people. As a result, in 2009 Jamaica imposed the first constitutional ban on any form of same-sex unions.

Further, the country updated the anti-sodomy law so that in addition to facing up to 10 years’ imprisonment, consenting adult gays would now be required to register as sex-offenders and always carry a pass or face a fine of JMD$1 million (about US$6,800) plus spend 12 months in prison for each offence of not having that pass.

In the past five years alone Jamaica has documented brutal mob attacks on trans people, home invasions and murder of gays while they slept in their beds, hideous acts of “corrective rape” to make lesbians “straight”, and LGBT youth as young as 10 years old being thrown out on the street by their parents.

Jamaican media has also represented LGBT people as dangerous freaks. Meanwhile massive anti-gay protests are being whipped up by some of island’s powerful churches and their Global North backers. Local politicians and musicians ride this tidal wave of popular homophobia with impunity.

In response, LGBT people and our local and international partners have embarked on several initiatives to counter the rising anti-LGBT sentiment, including delivering police LGBT sensitivity trainings, working with and amplifying the voices of progressive faith leaders, encouraging foreign leaders to engage our politicians on constructive ways to end homophobia, and also hosting Pride events to increase visibility of the queer population. People fear who or what they do not know. So, LGBT visibility is LIBERTY!

We have also been lobbying Caribbean governments at international fora to repeal of anti-gay laws, while simultaneously challenging these laws before the most senior tribunals in the region, As the protests for racial justice are making plain, removing statues and other racist symbols will not automatically undo centuries of oppression, but doing so is a critical first step towards healing deeply divided societies. For, as long as these statues remain, they will serve as focal points for and give licence to hatred. The same is true for anti-LGBT laws and they too must go.

So, as we tear down racist statues, we must also purge our societies of colonial statutes that continue to enslave our people. Until we repeal all remaining colonially imposed anti-sodomy laws, the work to liberate black people will remain incomplete. 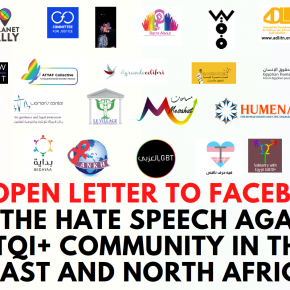