Opening with dramatic music and flashing images of military operations in Iraq circa 2003, when the United States invaded and overthrew Saddam Hussein, the program discusses IraQueer and its financial backers, HIVOS and USAID.

HIVOS, based in the Netherlands, is an international non-profit that works directly with activists in Middle Eastern, African, and Asian countries to support marginalized communities. The United States Agency for International Development, better known as USAID, is an independent agency of the United States government that allocates financial assistance to assist developing nations. Though HIVOS is headquartered in Europe, the Al-Alam program claims the nonprofit’s Western roots make it an instrument of an American cultural incursion in Iraq.

The proposition of the Iranian conspiracy-based exposé, which links the policy of former President George W. Bush during the Iraq War to that of President Barack Obama, Secretary of State Hillary Clinton, and current President Donald Trump, is that the United States is conducting a “cultural crusade” in Iraq: though the formal combat in Iraq has ended, Al-Alam claims the United States is continuing to corrupt and subvert the morality of Arab nations by funding LGBTQ organizations like IraQueer. The program ends with an ominous clip of President Bush declaring that the American “crusade [in Iraq] will take a while.”

The program also analyzes IraQueer’s safe houses, where LGBTQ Iraqis in unsafe environments can find shelter, food, and support. The television program suggests that IraQueer’s network of safe houses is responsible for the spread of COVID-19 in Iraq. Fear-mongering to civilians worried about the pandemic, Al-Alam presents graphic videos of doctors and sick people alongside generic stock images of Western LGBTQ+ Pride events. It also links the LGBTQ movement in Iraq to the spread of the fatal respiratory disease. There is no evidence to corroborate Al-Alam’s claims.

The program comes at a time of increasing cultural tension among Iran, Iraq, and the United States. This past month, the United Kingdom, European Union, Canadian, and World Health Organization embassies in Baghdad came in for sharp condemnation when they raised the rainbow LGBTQ pride flag on the International Day Against Homophobia. Politicians across the political spectrum in Iraq rebuked the decision and called for the expulsion of diplomats involved in the raising of the flag.

IraQueer has not yet responded to requests for comment about the Iranian television program and its impact on IraQueer’s operations.

Treatment of LGBTQ Iraqis has improved since the fall of ISIS in 2017, but homosexuality is not explicitly legalized or protected and many gay and transgender Iraqis continue to face persecution, discrimination, and violence.

Iran is one of 13 countries where same-sex activity is punishable by death. 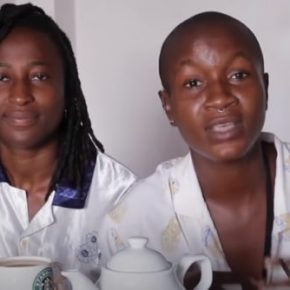