Anti-gay politicians and preachers seem to think that homosexuals either have evil superpowers or have captured the attention of a God who is both angry at them and a lousy shot, missing the target at least 28 times. 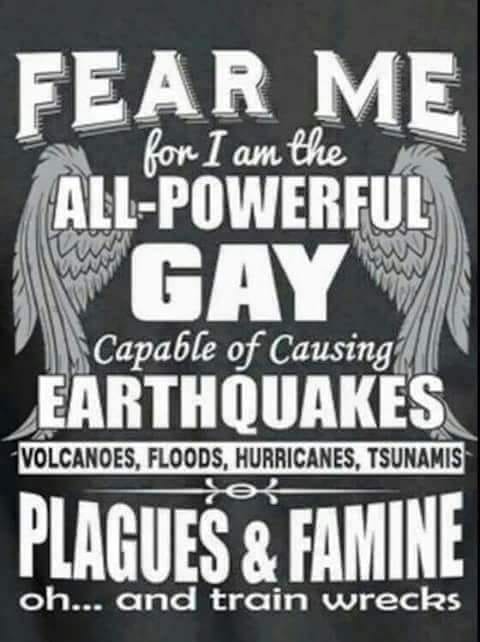 Why else blame gays for natural disasters? We have no idea, but tribal elders in Kenya and a legislator in Cayman Islands have provided the latest ridiculous examples.

The Kenyans claimed that God has responded to homosexuality and same-sex marriage by sending swarms of locusts to East Africa.

According to revered group of Kikuyu women, it is “highly likely that the locusts’ menace — wreaking havoc across the country like a typhoon — was a punishment for engaging in ‘vile acts’,” Citizen TV reported.

Thousands of miles away, Cayman Islands legislator Anthony Eden proposed that the Caribbean island should officially affirm Christian values in response to disasters and epidemics that he considers warnings from God not to allow same-sex marriage.

As reported in the Cayman Compass, he pleaded to the Cayman Islands legislature in February:

“Mr. Speaker, once the flood gates are opened, what will happen in Cayman? How are we going to stop it? A little population of less than 70,000 built on Christian values. We have been warned over the years.”

He listed hurricanes Gilbert, Ivan and Paloma as warnings from God.

“Just earlier this week, Mr. Speaker, an earthquake – the strongest tremor that I’ve known in my 75 years – hit these islands. There’s SARS. AIDS has been there over the years, gradually taking out many people. And now we hear of the coronavirus, recently declared a global emergency by the World Health Organization,” Eden said. “You’ve seen what’s happened. We better take warning of what’s going on.”

Eden is just one of dozens of alarmists who have blamed gays and/or God for multiple disasters. In addition to the locusts and the seven calamities that Eden cited, here is this blog’s list from 2014 of a further 20 disasters gays have been blamed for:

20 calamities where gays get the blame, starting with Ebola

Now that some conservative Christians are blaming gays for the Ebola epidemic — with no rational reason, as usual — it’s a good time for a recap of other calamities that LGBTI people have been blamed for.

More than a dozen natural disasters are on the list, each one interpreted as God’s violent response to the existence of LGBTI people or the growing acceptance of same-sex marriage. Also on the list are various murders and massacres, somehow attributed to gays who weren’t on the scene, along with some surprising accusations, such as gays’ alleged responsibility for the existence of autism and the size of Spain’s national debt.

Regarding Ebola, the Liberian Council of Churches declared that God was punishing the nation with the disease because God was angry over Liberians’ corruption and immoral acts such as homosexuality.

Previous outbreaks of the blame-the-gays virus

In recent decades, gays have been blamed for provoking the following 19 disasters, crimes and predicaments:

Famines in East Africa, from the 1970s onwards. (Televangelist Pat Robertson is an early contributor to the blame-the-gays list, as noted in “Robertson’s fault line” in The Advocate.)

Indian Ocean tsunami, 2004. (“They’re Going to Blame the Gays for Climate Change,” The Stranger. Author/columnist Dan Savage comments: “God may be all-knowing and all-powerful, but He is, it seems, a lousy shot, the Mr. Magoo of higher powers. Same-sex couples get married in Boston, Toronto and San Francisco, and a vengeful, near-sighted God triggers an earthquake that slams a killer wave into Indonesia, Thailand, India and Sri Lanka, killing a quarter of a million people who weren’t even invited to the wedding.”)

Earthquake in Virginia, 2011. (“Rabbi Says Quake Is Your Fault,” The Advocate)

Massacre of 20 children in Newtown, Connecticut, 2012. (TV commentator and former presidential candidate Mike Huckabee said, “I would never say that simply taking prayer and Bible reading from our institutions or silencing Christmas carols is the direct cause of a mass murder. [But] We dismiss the notion of natural law and the notion that there are moral absolutes and seemed amazed when some kids make it their own morality to kill innocent children. We diminish and even hold in contempt the natural family of a father and mother …” in “My Fox Show Monologue,” MikeHuckabee.com)

Floods in Britain, 2013-2014. (“Ukip suspends councillor who claimed floods were caused by gay marriage,” The Guardian)