The mayor of Montego Bay in Jamaica is trying to censor talk about same-sex marriage. That’s ridiculous.

Today the Jamaica Gleaner newspaper announced that the mayor has banned Montego Bay Pride from using the Montego Bay Cultural Centre for a series of events simply because there will be a public forum on whether Jamaica is ready for same-sex marriage. The mayor ridiculously said that even asking the public such a question would be violating the Jamaica constitution. We are not actually performing any such marriage.

Instead of reaching out to us, the country has once again shown its homophobic politics.

What is even more ironic is that the Jamaica Tourist Board had invited a group of tour operators that cater to the LGBT travel market to visit Montego Bay during Pride and these tour operators were supposed to be a part of Montego Bay Pride.

The current mayor is being pressured by the former mayor who last year tried to ban Montego Bay Pride’s LGBT film festival.

A copy of the “offensive flyer” for the public forum is attached.

My letter to the editor of the local newspapers is below: 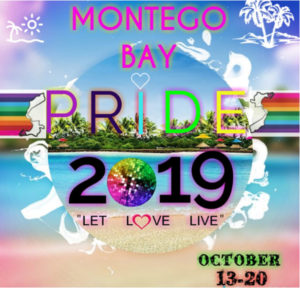 The decision of the Mayor of Montego Bay, Homer Davis, to yield to pressure from former mayor Charles Sinclair, to ban Montego Bay Pride from using the Montego Bay Cultural Centre because one event includes a public forum on WHETHER Jamaica is ready for same-sex marriage is unconstitutional censorship. The decision also flies in the face of all the recent pro-LGBT announcements made by the Minister of Tourism and others about the second city being welcoming to LGBT tourists.

As you may know the LGBT travel market is valued at over US$2 Billion dollars but Jamaica continues to shoot ourselves in the foot and deny ourselves access to this lucrative market by yielding to comfortable bigots and right-wing extremists like lawyer and former mayor Sinclair. Vital tourist dollars that could be used to assist in the development of our country is being spurned by truly reckless moves by our politicians.

As a proud Jamaican I am often asked if there should be a boycott of the country until it recognizes the full human rights of LGBT citizens. I usually say no because I am deeply concerned about the harm that will be inflicted on the more vulnerable members of our society that depend on tourism revenue, which is our largest foreign exchange earner. However, my pleas sound hollow when our politicians do their best to ensure that such a boycott is guaranteed to happen. Jamaica cannot hope to participate in and benefit from the world economy and ignore international human rights obligations.