Police in Malawi have arrested Gift Trapence, the leader of the country’s main LGBTI rights organization, the Centre for Development of People (CEDEP).

Also arrested was the Rev. Macdonald Sembereka, a prominent Anglican priest and activist.

Malawian and international media gave different descriptions of the charges against the two men.

The Nyasa Times cited Trapence’s role in recent protests and President Peter Mutharika’s accusation that Trapence and his associates were plotting to overthrow his government.

According to Malawi24, the charge against Trapence was fraud at CEPED “involving millions of kwacha.” (A million kwacha is worth about U.S. $80,000.)

The timing of the arrests was noteworthy, coming shortly after newly re-elected Mutharika accused Trapence of seeking to turn Malawi into “a lawless society” through protests about alleged fraud during the May 21 election.  The protests were organized by the Human Rights Defenders Coalition, where Trapence is co-chairperson and Sembereka is a member.

“We are not attacking the government; and no one wants to overthrow the government. These peaceful demonstrations are being done to force Jane Ansah to resign,” Trapence said.

However, the nationwide protests were marred by violence when some protesters looted shops, burned tires and battled police.

According to Malawi Freedom Network, “National Police Spokesperson James Kadadzera said police have arrested the two for misappropriation of donor aid money, with the complaint being lodged by the United Nations (UN) Agency.”

That article added, “while attracting eye brows, the arrest of the two human rights defenders has surprised many people, who are wondering as to why, their arrest comes at the pick of their heavy criticism of government, amid dissatisfaction over poor management of elections by the state appointed Charperson of the electoral body, Malawi Electoral Commission (MEC).”

This article was revised on July 11 to incorporate additional descriptions of the charges against Trapence and Sembereka. 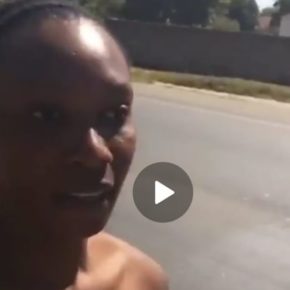