Activists in Bermuda and St. Lucia are planning those nations’ first Pride celebrations, while a fund drive is under way for Uganda’s seventh Pride, which is held annually except when police raids shut it down. See also news about Pride in India, Georgia and Ukraine.

In Kiev, Ukraine, over 8,000 people marched for Pride in what the AFP said was the biggest Pride march yet for the country. Participants were joined by a group of military veterans who said they were there to help protect participants from anti-LGBT demonstrators also in attendance.

Bermuda plans to hold first gay pride march on Aug. 31.
“There is an inherent value in a public celebration of our LGBTQ community in Bermuda as a reminder that we exist and that we are members of the Bermuda community. It is also a beacon of hope to LGBTQ youth and others who feel that they are alone,” said a spokesman for OutBermuda, which is sponsoring the Pride march.

The first Pride in St. Lucia is scheduled for Aug. 23–26. “The 2019 celebration theme ‘Persist with pride,’ is an affirmation for the LGBT community and supporters, as we stay the path towards the goal of full recognition,” supporters said.

In Tbilisi, Georgia, organizers of the “March of Dignity” decided to delay the first ever Pride march in Tbilisi. The event was to cap off a week of activities successfully held to raise LGBT awareness.  However, the day before the march, police used tear gas and rubber bullets against an unrelated crowd. Organizers, who have previously received death threats, feared the tensions were too high to keep participants safe.

In Amritsar, India, a group of teenagers organized the city’s first Pride march. The teens hoped the event would be an “evolution” to break the cycle of isolation local LGBT people face. Though, as The Times of India described, the public was more “bemused” and displeased when they Googled what the rainbows stood for.

“LGBT+ Ugandans face some of the world’s worst discrimination. We’re beaten by our families, harassed and arrested by the police, ridiculed by our neighbors, and hunted down by our government. We have no protections and can be sentenced to jail for life just for being gay.

“But time and time again, we fight for the precious opportunity to stand together in defiance at Pride Uganda. Because Pride gives us the rare chance to say, ‘We exist and we deserve dignity, safety, and respect.’

“Financially, we’re completely on our own… and we’re dangerously low on funds. Pride Uganda may not happen this year. Bringing together a global community of people like you to support Pride is our best bet for making it happen.

“All Out members fully funded Pride Uganda before and we need your help again.

“Can you chip in $10 today to fund Pride Uganda?

“If All Out members raise $19,658, we’ll have enough to fully fund Pride, including crucial security costs to help keep me and my community safe. … 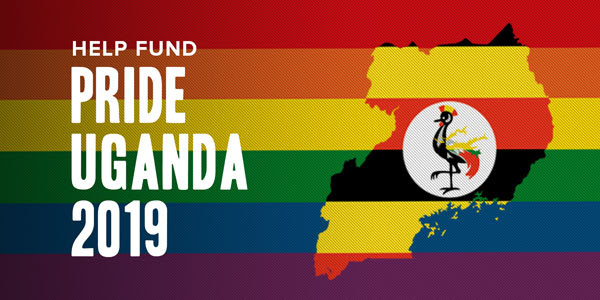 “U.S. clothing company Penguin is matching all donations up to $10,000. Donate today and your gift will automatically be doubled!”