Scores of Guyana residents marched for LGBT rights on Saturday in the country’s capital, supported by the Anglican bishop for Guyana and an editorial cartoon for one of the country’s leading newspapers.

The Pride parade was opposed by the Georgetown Ministers’ Fellowship, which had demanded that the government block it. The Guyanan government ignored that demand.

Charles Davidson, the Anglican bishop of Guyana and Suriname, expressed his support in a comment on Facebook:

Just saw a post from one of my clergy about “Georgetown ministers call for banning of LBGT March.”

I disagree with the call to ban and must point out that the LGBT community has the right like all of us to march on the streets of Georgetown with police permission.

WE ARE ALL GOD’S CHILDREN and our rights must be protected.

I am the Bishop of Guyana and I approve this message.

Guyana held its first gay pride parade, with the country’s gay rights activists accusing the three-year old government as well as the opposition of breaking their election campaign promises to outlaw discrimination against vulnerable groups.

“We are saying enough of the rhetoric, enough of the promises. It is time to make good on the legislative changes that we heard about from both parties in the 2015 elections and we want to see action and we want action now,” Joel Simpson told reporters. He acknowledged that the gay and lesbian community in Guyana is small but “our rights need to be respected like everybody else’s rights so this is a very, very visible way of demanding our rights.”

Several curious onlookers turned out at the starting point and along the route to get a glimpse at the parade by people of all walks of life, races, and ages. There were no major incidents such as  sustained verbal exchanges between participants and onlookers.

As the parade passed the Seventh Day Adventist Church located at Church and Oronoque Streets, Queenstown, at least two homosexuals skimpily clad in female attire gyrated and bent backwards towards the church. A number of adults and children, presumably parishioners, who were at the church door and entrance stood expressionless. …

Simpson, who heads the Society Against Sexual Orientation Discrimination (SASOD), said the parade was incident-free.  …

In his closing remarks at the end of the parade, Simpson took the opportunity to react to several Christian pastors in Georgetown who had objected to the parade and had called on government to stop it on grounds of illegality. “Under the Constitution of Guyana, every citizen is entitled to fundamental rights and freedoms. Aren’t we all Guyanese here? Aren’t we all entitled to fundamental rights and freedoms — freedom of assembly, freedom of association, freedom of expression, equal protection of the law and every right under the constitution. I don’t know what they are talking about,” he said.

The parade was organised by the Guyana LGBT coalition which includes SASOD, Guyana Trans United and the Guyana Rainbow Foundation. 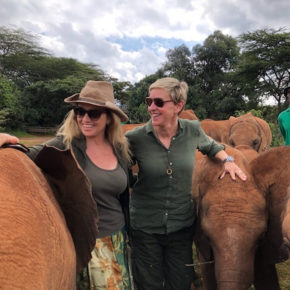