The buggery law in many former British colonies can be traced back to King Henry VIII, the Rt. Rev. Alan Wilson told today’s opening day of the Intimate Conviction conference in Jamaica, which seeks to repeal such anti-LGBT laws. “It had nothing to do with morality. It had to do with property,” Wilson said.

Henry wanted to accuse monks of homosexuality and seize control of their monasteries.

Before 1553, when the king turned the “detestable and abominable vice of buggery” into a capital offense, “it was a sin, not a crime,” said Wilson, , who is the area bishop of Buckingham in England.

That was one of many insights at today’s opening session of the Intimate Conviction conference,  which seeks to make a start toward repairing damage done by churches’ past role in passage of anti-LGBT laws in dozens of Commonwealth countries. A few other quotes from the conference are below, with more to follow.

All the proceedings of the morning session and the afternoon session were videotaped, livestreamed and uploaded to YouTube for viewing in the future.

The keynote address by the Rt. Rev. Dr. John Holder, the Anglican archbishop of the West Indies, provided detailed expert analysis of Bible verses that are typically cited by anti-LGBT Christians. His talk included a discussion of the story of Sodom and Gomorrah, which Holder called “a favorite hunting-ground for those who want to use the Bible to condemn homosexuality.”  His talk will be presented on this blog shortly.

Related articles about the tale of Sodom and Gomorrah:

Related articles about the conference: 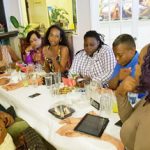