Ugandan President Yoweri Museveni has apparently had a change of heart about the nation’s approach to the fight against AIDS.

Pressure from growing, progressive and unapologetic civil society organisations is behind the change in Museveni’s position on the AIDS battle, some observers in Kampala say.

During the June 6 unveiling of a new plan seeking an end to HIV/AIDS in Uganda by 2030, Museveni admitted that he shares the blame for the country’s recent increase in HIV infections, because he believed, incorrectly, that the Uganda Aids Commission (UAC) was achieving its goals through programs such as the ABC Strategy, which promoted Abstinence, Faithfulness among couples and Condom use.

Now, Museveni said, he is learning about newer, more effective anti-AIDS strategies from visiting UNAIDS leader Michel Sidibe. After meeting with the President, Sidibe told activists that he believes Museveni is truly committed to ending HIV/AIDS in Uganda.

Pressure for change comes from civil society organizations and representatives of most-at-risk Ugandans, such as the country’s LGBTI community, who condemn corruption in Uganda’s public health sector and call for inclusion of all people, including homosexuals, in HIV treatment programs.

A Ugandan government study (obtained by the Erasing 76 Crimes blog and discussed in a Feb. 7 article) indicates that Uganda’s HIV burden has risen from 1.4 million people infected with the virus as of 2013 to 1.5 million in 2015.

Museveni’s apparent change of heart came just after a June 5 court ruling in the United States that condemned the work of American anti-gay Pastor Scott Lively, who helped fuel anti-gay hatred in Uganda. The court did not levy any punishment against him.

Gay rights observers told Erasing 76 Crimes in Kampala, after the meeting with Sidibe, that the anti-gay forces previously led by Pastor  Lively have acknowledged that there is an irreversible demand for care, treatment and support for homosexuals and key populations, who bear the biggest brunt of the pandemic, but have been intentionally denied health care.

Though the court dismissed the lawsuit, Ponsor’s 25-page ruling excoriated Lively and his anti-LGBT activities, stating that the “Defendant’s position on LGBTI people range from the ludicrous to the abhorrent” and that “he has tried to make gay people scapegoats for practically all of humanity’s ills.”

Ponsor continued, “This crackpot bigotry could be brushed aside as pathetic, except for the terrible harm it can cause.”


Working with a vast network of Ugandan born-again anti-gay Christians, Lively derailed Uganda’s achievements in fighting HIV/AIDS by claiming that people who are HIV-positive are morally bankrupt. In the years after he launched his anti-LGBT campaign, the level of HIV infections in Uganda, which had been dropping, began to rise once again.

Lively’s influence was spread by one of his Ugandan allies, Pastor Martin Ssempa, a Uganda-born American national who has been very close to Uganda’s First Lady, Janet Museveni, who also is a born-again Christian. Ssempa, has been convicted by a Ugandan court on charges stemming from his smear campaign against fellow pastors who did not believe in his anti-homosexual agenda and his calls for excluding LGBT people from health care. Ssempa has been in hiding since a U.S. judge ordered him to appear in court along with Pastor Lively.

Janet Museveni’s sympathies for Ssempa became clear during legal proceedings in Kampala in 2011. Witnesses referred to her as a backer of smear tactics by Ssempa and others, who made sodomy accusations against Robert Kayanja, a “prosperity evangelist” Christian pastor, TV star and younger brother of John Sentamu, the Anglican Archbishop of York, England. The campaign allegedly was organised by three competing clerics — Martin Ssempa, Solomon Male and Bob Kyazze.

Ssempa, Male and Kyazze; their lawyers, Henry Ddungu and David Kaggwa; their agent, David Mukalazi; and a state house employee, Deborah Anitah Kyomuhendo, were tried on charges of conspiring to injure Kayanja’s reputation.

In court testimony, an orphan who was  in the choir at Kayanja’s upmarket Church, the Miracle Centre Cathedral with a sitting capacity then of 10,000 people, said he was told that the sodomy accusations against Kayanja were supported by “big people” in the State House, including  Janet Museveni.

An earlier court hearing named State House employee  Kyomuhendo as being “sent by Janet Museveni” to organise the smear with Mukalazi. Two witnesses said they were offered 50 million Ugandan shillings (US$19,000 then) to tell the police that Kayanja had sodomised them.

One accusation had been that a boy was sodomised after a music competition in 2009 at Kayanja’s church. After his choir  won the competition, Kayanja supposedly drove him in a car with tinted windows to an unidentified Kampala hotel, under the guise of congratulating him. Instead, in the fabricated account, Kayanja sodomised him, then called a medical doctor to stitch up his anus and to declare him insane and put him in Kampiringisa Health Centre for a month.

Janet Museveni has had close ties with Ssempa — known internationally for his anti-gay “eat the poo poo” video — since the 1990s, including through joint work on abstinence-focused anti-HIV/Aids campaigns funded with millions of dollars by the Bush White House.

On a broader scale, smear campaigns have also played an important role in disrupting the appointments of public servants to key roles in the fight against HIV.

Controversy has surrounded the appointments of technical staff in public health institutions and even cabinet ministers.  Anti-homosexuality forces have demanded strict vetting of potential appointees to screen out anyone who is believed to be liberal-minded and sympathetic to homosexuals.

The Uganda Aids Commission and the Ministry of Health have often accused each other of promoting homosexuality whenever officials called for allowing access to health care for homosexuals as a method for reducing the nation’s level of HIV infections.

At present, the appointment of a new Director General for Health Services, the overall technical person on programmes implementation, is still pending. Some critics believe that the current acting director general, Dr. Anthony Mbonye, is too liberal. In recent weeks, he has been  smeared in local media as the brain behind the importation of batches of lubricants, which are widely criticized as a tool for homosexuality.  Mbonye has defended himself saying the importation of lubricants into Uganda is supported by the Global Fund. He also said the decision was made by his current boss, Minister Ruth Aceng (a staunch born-again Christian believed to be favoured by Janet Museveni), when Aceng was still director general and a member of the Global Fund management board in Uganda, the Uganda Country Coordinating Mechanism.

Other crucial pending appointments will be the new Uganda Aids Commission board chairperson and its director general, after the expiry of contracts for the current office holders, namely Prof. Vinand Nantulya and Dr. Christine Ondoa. Nantulya has been viciously attacked in Ugandan media as a gay sympathizer, which has fractured the unity of the national HIV/AIDS response. Appointments of ministers and commissioners in UAC are made by President Museveni.

It remains to be seen whether Museveni’s new attitude toward the nation’s anti-AIDS campaign will allow more effective new techniques to be implemented, resulting in improved access to health care for LGBTI Ugandans. 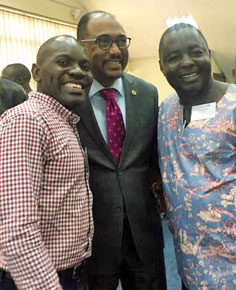