UPDATE: Below, see an ally’s account of the visit today (April 11) to see Stella Nyanzi in prison.

The dispute began in connection with her project to provide sanitary pads for needy girls, a project that the government has not supported. She ramped up her already fierce criticism of Moweri and his wife on her popular Facebook page.

Nyanzi, a research fellow at Uganda’s Makerere University, was detained at a hotel in the capital on Friday shortly after hosting a fundraising drive to raise money for sanitary pads for schoolgirls.

Police spokesman Asan Kasingye said on Sunday that Nyanzi was arrested for violating a law against misusing computers and that she would be charged with the offences of cyber harassment and offensive communication. …

On Facebook recently, Nyanzi rebuked First Lady Janet Museveni, who also serves as education minister, for saying the government had no money to buy sanitary towels (napkins) for poor schoolgirls, although the president had promised to budget for them when he was campaigning for re-election last year.

Many Ugandan girls are reported to drop out of school because of the shame they feel for lacking sanitary pads.

“I totally reject the idea that one cannot … and should not criticise the people responsible for abusing the rights of Ugandans and resources of Uganda through thirty-one years of increasing despotic family rule,” Nyanzi said in one of her Facebook posts.

Ugandan activist Stella Nyanzi has been charged with cyber harassment for referring to President Yoweri Museveni as “a pair of buttocks”.

Ms Nyanzi is a controversial academic, who campaigns on a variety of issues, from sanitary pads for schoolgirls to gay rights.

Last year, a dispute about her office at Uganda’s most prestigious university led her to stage a topless protest on national TV.

In a conservative society, where homosexual acts are outlawed, she has become an extremely divisive figure.

Her “buttocks” post was the latest in a string of sexually graphic social media entries.

While her audience has continued to grow there are mixed reactions to her musings. Some call her brave, others call her immoral and vulgar, the prosecution in the current case has questioned her mental health.

She has denied the charges, saying she only writes in metaphors, and some have argued that the charges are an attack against freedom of expression.

Stella Nyanzi is a 42-year-old mother of three – a daughter of 12 and two nine-year-old boy twins.

She strongly believe that as a Nnalongo – a title given to a mother of twins under Buganda culture – she has a licence to use vulgar language, because that same vulgar language was used during the traditional initiation ceremony for her sons.

Ms Nyanzi is also a human rights activist, campaigning on LGBT issues which are particularly sensitive in Uganda.

On her Twitter handle, she refers to herself as a “queer laughist and writer”. She also calls herself “a die-hard Facebooker who loudly speaks her mind based on her banal experiences of life”.

In a recent interview, she explained: “I’m a queer by specialisation. I do things queer, I study queer communities in Uganda, that is the language we speak.” …

A year ago she was in the spotlight when her battle against eviction from an office at the prestigious Makerere University’s Institute of Social Research came to light.

This time her opponent was the renowned academic Professor Mahmood Mamdani, Ms Nyanzi argued that she was being forced to lecture PhD classes which was not part of her contract as researcher.

Professor Mamdani had her office padlocked in a bid to ensure she was relocated.

Ms Nyanzi responded with rants on social media, coupled with a nude protest.

She locked herself in at the premises, and stripped naked in front of TV cameras, causing nationwide shock.

This year Ms Nyanzi turned her attention to the country’s minister of education and first lady Janet Museveni.

This after the government reneged on a campaign promise, made by President Museveni, to provide free sanitary pads to schoolgirls so that they “do not run out of school when their menstrual periods start”.

In her customary graphic language, Ms Nyanzi accused the first lady of being out of touch with reality.

This forced the often interview-shy Mrs Museveni to post an interview via her Twitter handle to deny the allegations.

She also said she had forgiven Ms Nyanzi. But this did not stop the diatribes against Mrs Museveni.

Last week the government scrapped a tax on sanitary pads, which some see as a concession to Ms Nyanzi’s campaign.

However, she was then arrested last Friday.

Many assumed that this was because of her comments about Mrs Museveni, although this was not mentioned in court.

Apart from the charges, the state prosecution has also made a request to court seeking to ascertain her state of mind, leading to fears she could be sent to a psychiatric ward. She was remanded in custody until 25 April.

While the outcome of the legal process is not clear, Ms Nyanzi is not apologetic and shows little sign that it will change her willingness to court controversy.

UPDATE: An ally’s account of an April 11 visit to Stella Nyanzi in prison, as posted on her Facebook page: 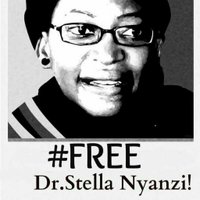 Today, we went to Luzira Prison to see Stella. We were thrown aback when we met two doctors from Butabika Hospital exiting the prison. (One of these has been identified as Dr Marlon and we are still trying to identify the other.)

Stella, who remains in good spirits, confirmed our suspicions; besides the mandatory examination that every prisoner undergoes, the state had gone ahead to send two of their Butabika-based doctors to carry out a psychiatric assessment examination. She however fervently protested and clearly stated that, if the state is to go ahead and unlawfully carry out these tests, the Ugandan government must allow to have her legal representation, a family member as well as her personal doctor present during the examination.

The Court yesterday found Stella fit to stand trial and the state’s attempt to subject her to psychiatric evaluation is outright unconstitutional. Such a test that is done without her consent or with no court order is illegal and the practitioner MUST be reported to the medical board for breach of ethics.

During our STATE SUPERVISED visit, we also observed that Stella was allowed only 2 visitors at a time, while other prisoners were allowed up to six guests in one go. We were interrupted by the warden every couple of minutes, something that was not being done for the other prisoners.

In this regard, we call upon the government of Uganda to accord Stella all the rights that she is rightfully entitled to as a citizen of Uganda. We would also like the state to clearly clarify on how many visitors each prisoner is allowed in one go.

Articles on this blog by and about Stella Nyanzi: