Sexism and homophobia are the targets of a strategic partnership fighting against the repression of both women and LGBTI people in the developing world.

“The root of homophobia is sexism,” says the Rev. Canon Albert Ogle, a leader of the partnership and president of St. Paul’s Foundation for International Reconciliation. “The LGBT movement globally owes so much to allies in the women’s community, who now face new challenges.”

The St. Paul’s Foundation is working on the project with female activists representing other LGBTI-friendly organizations in Uganda, Cameroon and Jamaica.

The next stage in the project, which needs financial support from allies, is to assemble the activist women for public appearances and strategy sessions in Washington, D.C., and California this month and in New York early next year.

To support this effort, make a contribution via the project’s page on Indie-Go-Go.

The goal of this next stage of the project, Ogle says, is “to develop a strategic response to the wave of religious extremism that is doing all in its power to undermine gender and LGBT equality worldwide. These meetings and expertise are necessary steps for us to develop a strategy to not only counter it, but to re-frame the issues in a way that we can win more hearts and minds.”

Gender and LGBT Equality at the UN

Recent developments at the United Nations Commission on the Status of Women and the increase of anti-LGBT equality in Africa, the Caribbean, Asia and the Middle East have reinforced our concern that without a robust engagement with religious and cultural leadership, both movements will not only fail to win hearts and minds, but will meet increasing pressure and opposition and lose ground. Often religious and cultural reasons are cited when rights-based issues for women and LGBT people are challenged. The root of homophobia is sexism and the LGBT movement globally owes so much to allies in the women’s community who now face new challenges.

We are fortunate to be working with several women allies through the St. Paul’s Foundation and they have asked to have new opportunities to create more specific strategies to link our movements to counter the rise of growing religious fundamentalism and extremism. For example, one of the local AIDS programs in Cameroon asked us to ensure that LGBT/gender equality issues were discussed at the last meeting of the African Sexual and Reproductive Rights Conference last February:

What We Need & What You Get

We need sponsorship to allow Maxensia’s dream of working on gender and LGBT issues at the next meeting of the UN Commission on the Status of Women to come true. She also needs to include two other women leaders:

Angeline Jackson, the executive director of Quality of Citizenship Jamaica, the only women’s specific program for lesbian, bisexual and transgender women in the Caribbean region and she has been working with the St. Paul’s Foundation since 2012. She will be returning to the USA in November to attend a two-month capacity-building program at the Los Angeles LGBT Center and MCC Founders Church. The St. Paul’s Foundation sees this opportunity for Angeline to continue to raise vital funds for her new organization with the goal to create a safe space for counseling and HIV testing and health care for the women’s community. Sexual violence and homophobia go hand in hand in Jamaica, and Angeline is excited about working more closely with other women like Maxensia to mentor her.

Maximilienne Mbe from REDHAC (Réseau de Défenseurs des Droits Humains de l’Afrique Centrale) in Cameroon. As executive director of one of the most important human defenders protection networks in eight Central African countries (predominantly French-speaking), Maximilienne has represented several LGBT causes, including presenting the case for an enquiry into the death of journalist Eric Lembembe. That appeal came at the African Commission on People’s and Human Rights in the Gambia in October 2013. …

Maximilienne is unable to attend the two conferences this year, but will be coming to the USA in March 2014. These three women are charged with the task of building a framework for dialogue between the LGBT movement and the women’s movement with a view to returning to New York in March 2015 to speak and network at the Commission on the Status of Women. There are several important events they would also like to attend when they come to the USA in November and will dedicate planning time to begin their new work together.

The Williams Institute at UCLA has been on the cutting edge of research, especially around LGBT poverty issues and Andrew Park, their new International Program Director, is convening 90 experts in Washington, D.C., on Nov. 11.  The theme of the all-day symposium is LGBT and Development Issues and we would like to find a way Angeline, Maxensia and Albert Ogle can attend this conference and use some time in Washington to connect with other organizations interested in LGBT and gender equality. 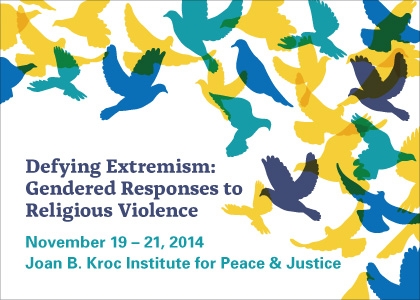 From Nov. 19 to 21, the University of San Diego will be holding a conference for 250 people on “Defying Religious Extremism”. This is a Catholic University that has created a very impressive women and peacebuilding program at the Joan Kroc School, offering a Master’s Program for postgraduates and respite and study time for a network of women peace-builders around the world. The school has integrated gender-related law and international development and is interested in creating a panel on LGBT issues at this conference, with support from our three women leaders. The conference will spend two days presenting issues, best practices and a final day reviewing policy recommendations and strategies towards implementation. We have invited representatives of the State Department and World Bank to attend and we will focus largely on the intersections of faith, homophobia and sexism and its impact on development.

These conferences and having two weeks together in the USA would allow these women the opportunity to present their experience and recommendations at the conferences and to build a network of allies in the USA and abroad to influence the upcoming meetings at the UN. We would work to develop a strategic response to the wave of religious extremism that is doing all in its power to undermine gender and LGBT equality worldwide. These meetings and expertise are necessary steps for us to develop a strategy to not only counter it, but to re-frame the issues in a way that we can win more hearts and minds.

Other Ways You Can Help

If you cannot find a way to support the costs of travel, per diem, accommodation and conferences registrations, you may like to spread the word about our efforts and share information on the work of the St. Paul’s Foundation. Please connect with us on Facebook or join our e-mail list: http://stpaulsfdr.org/index.html