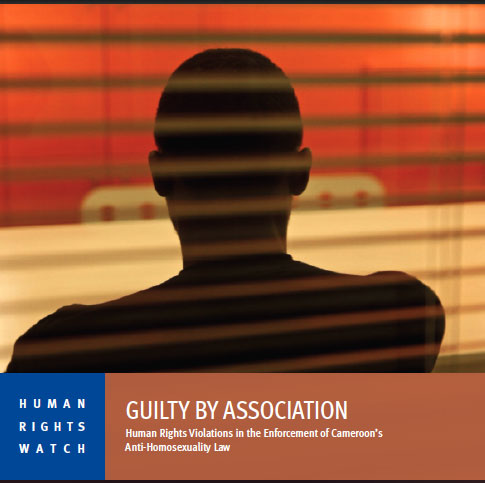 Most people charged with violating Cameroon’s law against homosexual activity are convicted based on little or no evidence, Human Rights Watch states in a report released today.  The study was prepared in cooperation with Cameroonian  LGBT-rights organizations Alternatives-Cameroun, the Association for the Defense of Gays and Lesbians (ADEFHO), and the Cameroonian Foundation for AIDS (CAMFAIDS).

The study cites “numerous cases in which the law against homosexual conduct was used for settling scores, showing how the law is easily subject to abuse. Dozens of Cameroonians do jail time solely because they are suspected of being gay or lesbian, the groups found.”

Below is today’s HRW press release about the study, which this blog will soon examine and report on in greater detail.


(Yaoundé) – Cameroon prosecutes people for consensual same-sex conduct more aggressively than almost any country in the world, four human rights organizations said in a report released today. The organizations – Alternatives-Cameroun, Association for the Defense of Gays and Lesbians (ADEFHO), the Cameroonian Foundation for AIDS (CAMFAIDS), and Human Rights Watch – found that at least 28 people have been prosecuted for same-sex conduct in Cameroon since 2010. Most cases are marked by grave human rights violations, including torture, forced confessions, denial of access to legal counsel, and discriminatory treatment by law enforcement and judicial officials.

The 55-page report, “Guilty by Association: Human Rights Violations in the Enforcement of Cameroon’s Anti-Homosexuality Law,” presents 10 case studies of arrests and prosecutions under article 347 bis of Cameroon’s penal code, which punishes “sexual relations between persons of the same sex” with up to five years in prison. The report found that most people charged with homosexuality are convicted based on little or no evidence. The report includes numerous cases in which the law against homosexual conduct was used for settling scores, showing how the law is easily subject to abuse. Dozens of Cameroonians do jail time solely because they are suspected of being gay or lesbian, the groups found.

“It’s regrettable that our country stands out as one of the  few countries in the world that regularly prosecutes people for same-sex conduct,” said Dominique Menoga, executive director at CAMFAIDS, a Yaoundé-based organization. “Cameroon’s government says it’s committed to respecting human rights, but its actions, when it comes to sexual and gender minorities, suggest exactly the opposite.”

“Our government and our courts need to recognize that when it comes to Cameroon’s international human rights commitments, they cannot pick and choose on the basis of personal biases,” said Alice Nkom, president of ADEFHO. “Every time a judge in Cameroon convicts someone of homosexuality, they are violating the law, pure and simple.”

Nearly every “homosexuality” prosecution investigated by the four organizations was marked by serious due process violations and other rights abuses. Suspects were regularly arrested solely on the basis of rumor and without warrants, in violation of Cameroon’s criminal procedure code. Police in Cameroon claim that the law exists for the purpose of punishing people who engage in same-sex conduct in public, but in all of the cases known to the four organizations, there was not a single case in which a suspect was caught having sex in public.

Because most “homosexuality” arrests are not based on information from witnesses or other evidence, law enforcement officials rely heavily on confessions, often extracted through torture and ill-treatment. One 17-year-old arrested by gendarmes in Yaoundé said, “The investigator beat me on the bottoms of the feet, 50 strokes with the back of a machete.”

Judicial officials frequently fail to uphold their obligation to interpret the law with objectivity, relying instead on their own biases. Two men in Yaoundé were convicted because gendarmes found condoms and lubricant in their house while purportedly searching for a stolen laptop.

When two young transgender people in Yaoundé were arrested, a judge said their choice of alcoholic beverage – Bailey’s liqueur, which the judge regarded as a “woman’s drink” – constituted proof of their homosexuality. They were convicted and sentenced to five years in prison. Their conviction was subsequently overturned by an appeals court. But the same court recently upheld the conviction of Roger Mbede, who was charged with homosexuality for sending a text message to another man reading, “I’ve fallen in love with you.”

“No one should be sentenced to prison time because they blurt out a confession to stop torture, or because a judge doesn’t like what they drink, how they dress, or what kind of text messages they send,” said Neela Ghoshal, lesbian, gay, bisexual, and transgender (LGBT) rights researcher at Human Rights Watch. “The way the law is enforced in Cameroon seems to suggest that if you’re suspected of being gay or lesbian, human rights, such as the right to a fair trial and the right not to be tortured, no longer apply.”

The report also documents repeated death threats received by two human rights lawyers, Alice Nkom and Michel Togué, due to their defense of clients charged with homosexuality. Both lawyers have alerted the authorities, but law enforcement officials appear to have taken no action to investigate the threats against the lawyers.

President Paul Biya stated at a news conference in Paris in January 2013 that “minds are changing” with regard to homosexuality in Cameroon, but he made no commitment to take concrete steps to decriminalize homosexual conduct.

“We are calling on our government to stop waiting around helplessly for minds to change, and instead to show a bit of courage,” said Yves Yomb, executive director at Alternatives-Cameroun. “The government should decriminalize same-sex conduct, withdraw charges against those who are currently being tried for homosexuality, and inform the public that this is a matter of upholding fundamental rights.”