The government of Cameroon has acknowledged that its LGBTI citizens are increasingly the targets of violent homophobic attacks.

Voice of America reported on Nov. 28:

About 15 people are shouting and beating a person they claim is homosexual. In the video widely circulated on social media platforms including Facebook, WhatsApp and YouTube, the mob forces the naked person out of a room, pulling their legs apart and saying the person is a man dressed and behaving like a woman.

Human Rights Watch said in a November 20 dispatch that the video is that of a violent mob humiliating a 27-year-old intersex person in Cameroon’s capital, Yaoundé.

Paul Abbo said he witnessed the assault on the intersex person. Abbo said he hopes the humiliation of the individual will dissuade homosexuals and lesbians from what he said is a practice that does not honor Africa. …

This week Cameroon said attacks on lesbian, gays, bisexual, transgender and intersex people are increasing in the central African state.

Rene Sadi is communications minister and government spokesperson. He said although gay sex and practices are illegal in Cameroon, no one has the right to abuse a suspect.

“Homosexuality, it must be reiterated, remains a sexual orientation that is suppressed by our laws because it is contrary to our realities, our convictions and our culture as well as to the requirements of procreation. But for all that, it is not up to each and every one of us to take the place of justice in punishing those who might be found guilty of homosexuality. It is an insult, an assault which is also punishable by law,” he said.

Sadi said only Cameroon law has the right to establish and punish lesbian, gays, bisexual, transgender and intersex offenses.

Cameroon has not given further details on how many LGBTI people have been attacked.

However, Human Rights Watch said in a report in April that LGBTQ people are suffering a fresh wave of persecution in Cameroon, where same-sex relations are illegal.

The group said police in February detained 12 youths in the eastern town of Bertoua for homosexuality, beat them and locked them in a police station. Police in Douala, a commercial city, detained Loic Njeukam, known as Shakiro, and Roland Mouth in February for wearing women’s clothing while eating at a restaurant.

Cameroon law prohibits sexual relations with a person of the same sex with a penalty of between six months to five years imprisonment.

Rights groups say Cameroon’s police tend to target public gatherings of LGBTQ people. Human Dignity Trust, a group that defends the rights of LGBTI people, reports that there is an uptick in police action against LGBT in Cameroon. It says at least 24 people have been arrested, beaten, or threatened by security forces for alleged consensual same-sex conduct or gender nonconformity since February. 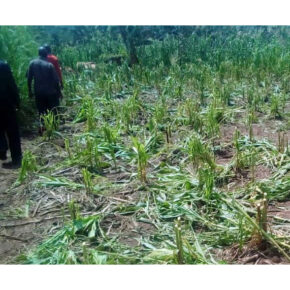