Ukraine legalised gay sex in 1991, but members of the far right regularly target groups and events linked to the community.

The Openly news service, which promises “impartial LGBT+ news for a world that isn’t”, reports:

Aug 3 (Openly) – For days, death threats and homophobic insults have been pouring into Sofiia Lapina’s messaging inbox – a constant reminder of the hatred she often encounters as an LGBT+ rights activist in Ukraine.

Members of a far-right channel on the Telegram messaging app published Lapina’s phone number last month, and – following a series of recent attacks on the LGBT+ community – she is on edge. Some people have tracked down her address, too.

“They photographed my balcony, the entrance to my building, and they’ve been sending it all to me,” she said.

“It’s difficult to sleep, knowing that people have declared (they are hunting) you.”

Ukraine legalised gay sex in 1991, but conservative elements in the mainly Orthodox Christian nation often speak out against rights for LGBT+ people, and members of the far-right regularly target groups and events linked to the community.

Campaigners said homophobic abuse and violence could be increasing partly because of the growing visibility of the former Soviet nation’s lesbian, gay, bisexual and transgender community.

Clashes broke out on [July 30] between police and far-right supporters outside the president’s office, where Lapina’s UkrainePride organisation was holding a rave to demand LGBT+ equality, local media reported.

“The LGBT movement is becoming more powerful, more productive, more effective,” said Lenny Emson, director of KyivPride, which has pushed back its annual march in the capital from June to September this year due to COVID-19.

“On the other hand, the stronger we are, the bigger the backlash.”

Police data shows 14 hate crimes were recorded on the grounds of sexual orientation and gender identity in 2019.

But rights organisations said the real number was likely to be much higher, partly because many victims are wary about going to the police.

The Organization for Security and Cooperation in Europe’s Office for Democratic Institutions and Human Rights received reports of more than 140 incidents – ranging from threats to physical attacks – in Ukraine in 2019.

When such crimes are reported to police, homophobic or transphobic motives are largely ignored, instead being classified as acts of “hooliganism”, Nash Mir Center said.

Ukraine’s Ministry of Internal Affairs, which is in charge of the police, did not immediately respond to a request for comment.

Ilyess El Kortbi, 24, was attacked in June after attending a protest outside the president’s office in Kyiv to demand a response to anti-LBGT+ attacks and support a draft law that would bolster protections for victims of hate crimes.

He needed hospital treatment after three unidentified people beat him up outside a cafe after insulting him.

“I have a concussion … I can’t walk, I fall over, I’m nauseous,” he told the Thomson Reuters Foundation by phone from a hospital in Kyiv several days after the incident.

In May, about a dozen members of a far-right group raided a screening of an LGBT+ film jointly organised by KyivPride, breaking windows and throwing a flare and a teargas canister into the premises, KyivPride said on Facebook.

A Kyiv police spokeswoman said criminal proceedings under the article of hooliganism had been launched over the assault on Kortbi and the film screening unrest.

Two days later, members of another far-right group stormed events organised by LGBT+ rights group Insight in Kyiv and the city of Odessa.

“If the police had detained those attackers that tried to disrupt Insight’s event that day, then they wouldn’t have come to our office and broken our windows,” said LIGA chairman Oleg Alyokhin.

Police said they reviewed the disruption to Insight’s Kyiv event but found no grounds indicating that a criminal offence had been committed.

Local and international rights groups have condemned the recent spate of attacks in the country, where discrimination against gay people in the workplace was only banned in 2015.

In June, Amnesty International Ukraine described the violence as part of a “targeted campaign of intimidation of feminists and LGBTI activists by groups promoting hatred”.

However, Olena Shevchenko, head of Insight, said a recently proposed anti-discrimination bill could help tackle anti-LGBT+ crimes by giving police a specific mechanism to investigate them.

The draft law, which was submitted in May, proposes adding sexual orientation and gender identity as motives for crimes of intolerance, or hate crimes.

Similar bills were withdrawn last year after lobbying from religious groups, but Andrii Kravchuk from the Nash Mir Center said the latest effort was more promising because it was developed by the police and submitted by the cabinet.

Lapina said she did not have high hopes for justice, citing what she called the inaction of authorities.

“This is activism in Ukraine,” she said. “You’re constantly being pursued.” 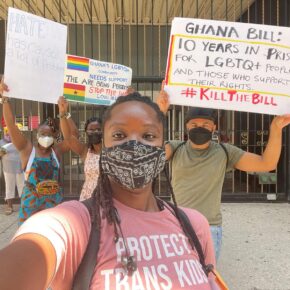 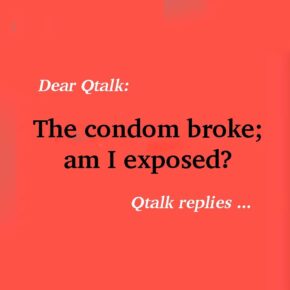