The Saint Lucia-based organization United and Strong has launched a campaign against domestic violence, which it labels a “growing epidemic”.

According to a survey of seven Caribbean nations, one in every 10 people in the region is a victim of domestic physical violence.

A primary goal of the “Hear My Voice” campaign is passage of a new Domestic Violence Bill that will apply to all victims of domestic violence.

This is the group’s announcement of the campaign:

(June 25, 2021) Domestic violence is a major issue in households across the world to the extent that it has become pervasive and endemic in society. Successive administrations here in Saint Lucia and the world-over appear to be ignoring this growing epidemic of intimate partner violence. Nonetheless, victims continue to be afflicted with a range of emotional, financial, social and physical trauma, stemming from the scourge of abuse, while the perpetrators generally face little to no consequences.

The 1995 Domestic Violence Act which was amended in 2005, was designed to offer solutions and reduce domestic violence in Saint Lucia. However, the effectiveness of this act has been brought into question especially in terms of its inclusiveness and ability to adapt to contemporary realities. To this end, a new domestic violence bill was drawn up but to date it has yet to become law despite repeated assurances of its enactment.

United and Strong continues to lobby the government and has launched a ‘Hear My Voice’ campaign. Funded by OutRight Action International, ‘Hear My Voice’ aims to reinforce the need for the enactment of the new Domestic Violence bill to cover all victims of domestic violence under the law.

The campaign includes a video challenge where activists and everyday citizens call upon women ministers of government and female opposition leaders in Saint Lucia to support the enactment of the new domestic violence bill.

According to the findings of a 2010 UN Development Program (UNDP) survey where 11,000 adults from seven Caribbean countries were interviewed — 9.7% of Saint Lucians reported experiencing physical violence at the hands of someone they live with. At the time, this average was only marginally lower than the Caribbean region’s average of 10.9%. In light of the COVID-19 pandemic and other socio-economic factors, the number of cases of intimate partner violence have likely increased.

The hope is that the ‘Hear My Voice’ campaign motivates government leaders to pass the new Domestic Violence Bill and act on behalf of abused and voiceless Saint Lucians who have yet to receive justice for domestic abuse. 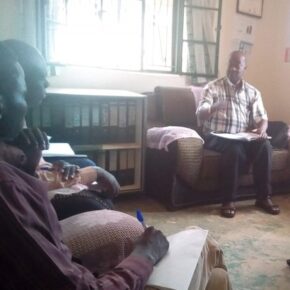