Second of a series of articles about LGBT victims of homophobia who are imprisoned at Yaoundé Central Prison in Cameroon.

They fell in love at work.

Allen was a company accountant; Nick, a secretary. When they met, their eyes locked on each other — discreetly.  Before long, their relationship deepened and they moved in together.

Outside work, they shared a life of love and companionship. Around the office, they were careful not to let their feelings show.

But their boss still found out.

He cut off their pay and, when they complained, he called in the police, who arrested both men at work and hauled them away.

Allen and Nick were convicted of violating Cameroon’s anti-homosexuality law. In October 2020, they were sentenced to 18 months at Yaoundé Central Prison, where inmates must survive in dirty, crowded confines with only one small, poorly cooked meal per day.

You can help set them free. Please donate.

Allen and Nick are only two of 11 LGBT victims of Cameroon’s homophobia who are currently confined at Yaoundé Central Prison. Another six LGBT Cameroonians are also serving prison sentences there, along with three LGBT detainees who have been been locked up for more than a year awaiting trial.

Project Not Alone / Pas Seul 2021 is seeking contributions to pay legal expenses of the three awaiting trial; the fines of Allen, NIck and six other prisoners (so they will not have to remain in prison to work off their fines after their sentences end); and four bimonthly deliveries of food and hygiene items to all 11 LGBT prisoners. None of the 11 has been charged with any criminal offenses other than homosexuality.

Nick and Allen are hoping to put their current troubles behind them, freed from a prison where they are regularly insulted and attacked by homophobic guards and fellow prisoners. Their ultimate hope is that they will be able to leave Cameroon and emigrate to a Western country where they can live without fear.

Nick, 29, is tall man who listens much more than he talks.

Allen, 38, the talkative member of the couple, is slim with red-black hair. Before his arrest, after years of working as an accountant, he had made enough money to rent an apartment in a Yaoundé housing development.

There, Allen recalled, “we lived a beautiful relationship that we kept well hidden. In the office, we gave no sign of what was going on except an occasional exchange of loving looks.

“Our work did not suffer at all. In fact, we both were appreciated by the boss until the day when he surprised us at a coffeehouse. We had gone out on a Saturday night for a romantic stroll. We had taken a seat in a discreet café — unfortunately at the same time when our boss was there. We were talking lovingly when our boss noticed us. It was the beginning of our hell.

“The boss started to inquire about our private lives, asking if we were married, if we had children,  and why we were not married. Eventually he concluded that we were homosexual. ”

At first, the boss did not confront the two lovers. They were not fired or bullied. They continued to work normally without suspecting what was going on. Without notice, the company stopped paying them.

That went on for two months before they realized they are the only workers who were getting no paycheck. All their colleagues were being paid regularly.

They went to the boss to demand an explanation. He threatened them. They argued violently. Then the boss called police, who arrested Allen and Nick and hauled them off to jail.

To help them and the other nine LGBT detainees, U.S. tax-deductible donations to Project Not Alone / Pas Seul 2021 may be made via: 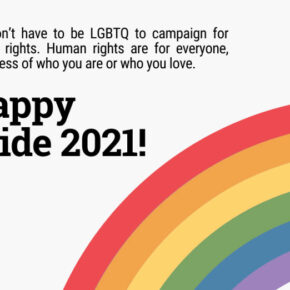