The detainees are currently held at a local police station, Mugisha stated on Twitter.

SMUG noted: “The continued use of COVID restrictions to violate the LGBTIQ+ rights in Uganda continues.”

The shelter residents were held for 50 days before charges were dropped. They sued two Uganda officials, accusing them of torture. Each of the detainees was awarded cash damages of 5 million Ugandan shillings (about US $1,341) as compensation for their mistreatment.

This is breaking news. More information will be published as it becomes available. 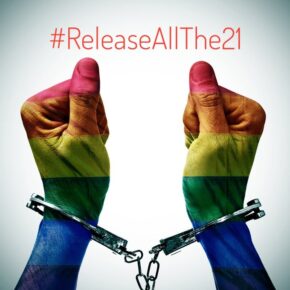