The Eastern Caribbean Alliance for Diversity and Equality (ECADE), an LGBTQ+ advocacy group, is offering assistance to queer people, people living with HIV, and women and girls affected by the eruption of the La Soufrière volcano in St. Vincent.

ECADE is also seeking donations to help it meet immediate needs on the island.

The April 9 volcanic eruption in the north of St. Vincent has caused the evacuation of 20,000 people, according to reports. La Soufrière has continued to spew smoke and ash, and eruptions are expected to continue for at least the next several days.

“Of particular concern is the situation of LGBTQ+ evacuees in a region where they are criminalised,” notes ECADE’s executive director, Kenita Placide. “LGBTQ+ evacuees and PLHIV [people living with HIV] may fall though the cracks or feel forced to hide their status, sexuality and/or gender identity to access help or avoid discrimination. We will do everything in our power to provide safe and affirming assistance for LGBTQ+ people and PLHIV in addition to women and children who face their own set of risks in disasters.”

ECADE is working with its Vincentian member organizations, the Saint Vincent and the Grenadines Chapter of the Caribbean HIV/AIDS Partnership (VincyCHAP) and Red Root, to deliver relief on the ground. Aid includes food packages, clothing, and relocation and housing support.

“Saint Vincent’s utilities, commercial sector and social infrastructure have begun to show signs of stress and hint at potential future impact,” ECADE stated in a press release. “ECADE has therefore launched a fundraising appeal on the Global Giving site.”

Same-sex intimacy is illegal for both men and women in Saint Vincent and the Grenadines, and carries a maximum ten-year sentence under the “buggery” and “gross indecency” sections of the nation’s Criminal Code. Both Criminal Code provisions are the subject of an ongoing court challenge seeking to have them struck down. 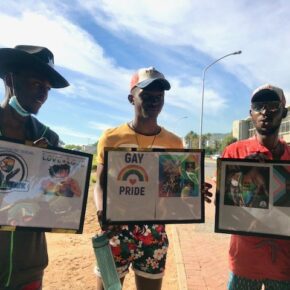