[This article has been revised to state that 14 LGBTQ people were arrested at the party — a revised figure reported by the African Equality Centre based on information from the LGBTQ community in the Mpraeso area. In the original reporting on this site and elsewhere, 22 people were said to have been arrested.]

In Ghana, police over the weekend arrested 14 LGBTQ+ persons at an event that a local leader reported as a rumoured “lesbian wedding”.  It was actually a birthday party, according to the attendees and — eventually — the police.

This account is based on information from the Ghana-based pro-LGBTQ+ African Equality Centre (AEC), GhanaWeb and Angel TV Ghana.

The Kwahu Obomeng chief, Nana Effah Opinaman III, and elders alerted Mpraeso District Police about the alleged “lesbian wedding”, which was attended by up to 30 people, he said.

Opinaman said that, after reporting the event to police, he organised his people to keep watch over it. People arrested at the event were from Accra, Kumasi, Takoradi, and elsewhere, he said.

He added that, because “LGBTQ+ is a ‘taboo’, rituals will be performed to cleanse the town, especially the house that hosted the event. Owners of the property will be summoned for questioning by the traditional leaders, the chief said.

Police found no evidence of a lesbian marriage at the location, according to Sgt. Francis Gomado, public relations office of the Eastern Regional Police Command.

“There was no marriage going on, or there was no blessing of a marriage ceremony between two ladies,” he said.

The arrestees were still in police custody at the Mpraeso District Police Station on Monday, Gomado said.

Initially they will face charges of violating Covid-19 protocols, he said. Investigations of the incident are ongoing, which may lead to additional charges, he said.

It was unclear whether the arrestees have legal representation, the African Equality Centre stated.

The AEC issued a statement about the incident and the ongoing anti-gay fever that has gripped Ghana:

“We feel disappointed in the whole system, including the government and the media, which have allowed homophobia and hate to flourish in Ghana. Religious opinions are considered supreme, [superceding] even the basic rights protected by the Ghanaian Constitution.

“Rights such those protecting Freedoms of Speech and Expression, Freedom of Assembly, Freedom of Association, Right to Privacy and Right to Dignity have all been robbed, especially this year as the LGBTQIA+ community has experienced an unprecedented amount of homophobia from religious, political and media personalities. There is now a 30-member homophobic group of MPs in Ghana’s Parliament called ‘Believers Against LGBTQI’ and they are leading plans to pass an anti-LGBTQ bill in Ghana.

“The biggest fear is that blackmailers may take advantage of the current situation to do more harm to the LGBTQI community. They will not be afraid to rob people, kidnap people, beat people, out people, blackmail people and steal their money, phones and laptop. These people have always had an idea that they have the law and majority of Ghanaians on their side, so they will be motivated by the heavy amount of hate to do more harm.”

The news site GhanaWeb presented its own version of the incident from a local journalist who cited “information from a source” at the event who insisted that it was “marriage ceremony between two females”.

The source said “a pastor who couldn’t immediately be identified as a member of the group or otherwise” officiated at a wedding ceremony elsewhere “in the inner quarters of the house”.

The source said that, after that ceremony, the two women emerged for the party, one of them wearing “what looked like a lace made into a wedding gown with a veil, bridal fan and bridal purse, the [other] acting like a man … in a Nigerian outfit.”

The African Equality Centre commented, “Ghana media is opinionated, especially on LGBTQ-related stories so, yes, the GhanaWeb article is a travesty.” 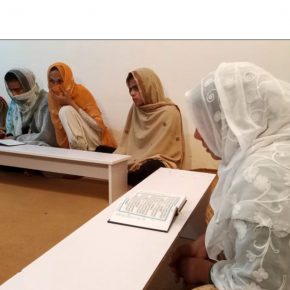